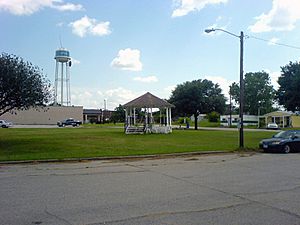 The town was originally named "Gossip", until its development in the late 1880s. A man by the name of J.C. Smythe purchased 80 acres (32 ha) of abandoned cornfields in the northeastern corner of Johnson County and began to plan a townsite. He named his new town "Venus", after the daughter of a local doctor. By 1888 the new town had a post office and a population of around ten residents. Being at the junction of two major railroads, Venus prospered and for a time was one of the fastest growing communities in Johnson County. By the 1920s, Venus had its own schools (including a small college), several businesses, a weekly newspaper (the Venus Express), and a population which exceeded 800.

The Great Depression had massive negative impact, however, and in the 1930s the town began to decline. Growth of the Dallas–Fort Worth metroplex just to the north hastened its decline, with many of its residents relocating to the growing urban area in search of work. By 1940 the population had fallen to 200, and the only remaining operating business was the drug store.

Venus began to recover somewhat in the late 1940s, and the population soon increased back to over 300. Growth was slow but steady throughout the remainder of the 20th century; by 1990 there were 977 residents and the town had spread into neighboring Ellis County. The 2000 census listed the population at 910, but the population more than tripled to 2,960 in 2010, due largely to the southward expansion of the Metroplex.

U.S. Route 67 passes through the town north of its center; the highway leads northeast 7.5 miles (12.1 km) to the center of Midlothian and west 7 miles (11 km) to Alvarado. Downtown Dallas and Fort Worth are each 31 miles (50 km) away, Dallas to the northeast and Fort Worth to the northwest.

The climate in this area is characterized by hot, humid summers and generally mild to cool winters. According to the Köppen Climate Classification system, Venus has a humid subtropical climate, abbreviated "Cfa" on climate maps.

There were 332 households out of which 34.9% had children under the age of 18 living with them, 61.1% were married couples living together, 10.2% had a female householder with no husband present, and 25.9% were non-families. 23.2% of all households were made up of individuals and 11.4% had someone living alone who was 65 years of age or older. The average household size was 2.74 and the average family size was 3.21.

All content from Kiddle encyclopedia articles (including the article images and facts) can be freely used under Attribution-ShareAlike license, unless stated otherwise. Cite this article:
Venus, Texas Facts for Kids. Kiddle Encyclopedia.