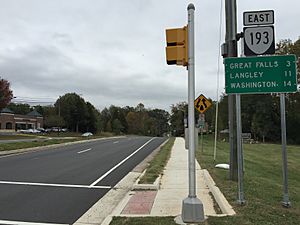 View east along SR 193 at SR 7 in Dranesville 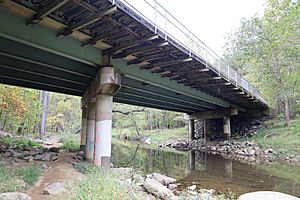 SR 193 begins at an intersection with SR 7 (Leesburg Pike) in Dranesville. The state highway heads east as a two-lane undivided road and passes between many of the affluent residential subdivisions of Great Falls. After passing through the village center of Great Falls at Walker Road, SR 193 turns east-southeast and follows the edge of Great Falls Park. The state highway features many sharp curves as it drops into the stream valley of Difficult Run. SR 193 passes through several curves as the highway skirts residential subdivisions, passes the Madeira School, and crosses Bullneck Run and Scott Run. The state highway temporarily expands to a four-lane divided highway around its interchange with I-495 (Capital Beltway) in McLean. After passing Langley High School and Chain Bridge Road, the old alignment of SR 123, SR 193 reaches its eastern terminus at SR 123 (Dolley Madison Boulevard).

When first constructed, the Georgetown Pike continued through the District of Columbia's Alexandria County (now Arlington County, Virginia) to the banks of the Potomac. It was listed in the National Register of Historic Places in 1974.

The listing describes Georgetown Pike as located in both Fairfax and Arlington Counties, Virginia. Beginning at the boundary of the District of Columbia and Arlington County at Chain Bridge on the south bank of the Potomac River, it extends .4 miles to cross the Fairfax County line, then continues 14 miles in an approximately northwesterly direction to meet the Leesburg Pike near Dranesville in Fairfax County. After beginning the ascent from Chain Bridge, the river is never again visible from the road, although it passes so close to the river at Great Falls that the roar of the water can be heard. The Georgetown Pike roadbed is approximately 20- to 24-feet wide within a 50- to 60-foot-wide right-of-way as built in 1813-1827. A crowned and graduated stone highway, constructed according to a modified Tresauget system, the Georgetown Pike surpassed the standards of the enabling legislation of both the U. S. Congress and the Assembly of Virginia. John Mason, Jr., president of the Falls Bridge Turnpike Company, wrote to the Board of Public Works in 1820 that the roadbed was "paved with large stone, closely fitted together, 12 inches deep in the centre, falling off to 6 inches on the sides, and covered with broken stone 6 inches deep from side to side; making 18 inches stone in the centre, and twelve inches on the sides; the whole is covered with sand, gravel or clay, as was found most convenient."1 This substantial method of construction has served the road well, as it has survived flooding, war, neglect, and adaptation for automobile traffic. The Georgetown Pike is a road built in conformance with the most advanced engineering expertise and construction resources of the early nineteenth century. Men using hand tools and horse-drawn equipment formed the roadbed, clearing, blasting, plowing, scooping, and filling the rough terrain. Stone retaining walls, culverts, arches, and bridges were built where necessary, working within the context of the natural terrain to the extent possible. An original road bridge with stone and brick viaduct at Bull Neck Run, and a massive stone retaining wall at Pimmit Run in Arlington County are notable survivors. John Templeman, builder of the Potomac Chain Bridge in 1808, served as superintendent of the road from December 1, 1817, to April 30, 1818. He designed and built an additional chain bridge to carry the Pike over Difficult Run. Though this bridge is not extant, it was described by Mason as "220 feet long, and 20 feet wide; it stands on two large stone abutments, and three stone piers 18 feet high; is further supported by three ranges of chains, extending from end to end, resting on the stone piers; and has supports of strong upright timbers between the piers where necessary."

The entire route is in Fairfax County.

All content from Kiddle encyclopedia articles (including the article images and facts) can be freely used under Attribution-ShareAlike license, unless stated otherwise. Cite this article:
Virginia State Route 193 Facts for Kids. Kiddle Encyclopedia.