Vlamertinge is a village in the Belgian province of West Flanders and a borough of the city of Ypres. The village center of Vlamertinge lies just outside the city center of Ypres, along the main road N38 to the nearby town of Poperinge.

In addition to the city center of Ypres itself, Vlamertinge is the largest borough of Ypres. In the west of Vlamertinge, along the road to Poperinge, is the hamlet of Brandhoek.

The earliest data about Vlamertinge date from the Middle Ages. In 857 a chapel was built in Vlamertinge. In 970 Ypres was destroyed and the chapel of Vlamertinge burned down. The oldest document, known to date, which includes the name Flambertenges, is a deed of the year 1066. Baldwin V, Count of Flanders, his wife Adela and their son Baldwin, in this deed gave goods to the church and the Chapter (religion) from Sint-Pieters by Lille. These goods were, among others, a tenth located in Elverdinge and also a tenth located in Vlamertinge - "In territorio Furnensi, in villa Elverzenges, decinam unam ; Flambertenges decinam similiter unam".

In the Ancien Régime Vlamertinge was a "Heerlijkheid" of Veurne-Ambacht with 22 backlendings and suffered a lot from the sieges of nearby Ypres.

During the First World War, the whole village was destroyed by bombing. In 1944, during the Second World War, Vlamertinge was liberated by a Polish armored division. 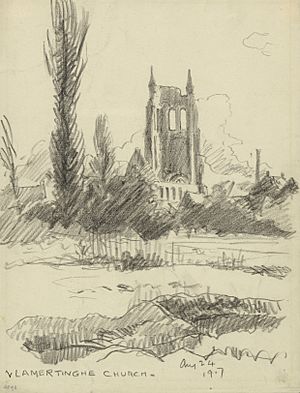 From 1487 to 1697 we see a large decline in the population of Vlamertinge. The most plausible explanation for this would have been the Eighty Years' War in the Seventeen Provinces. 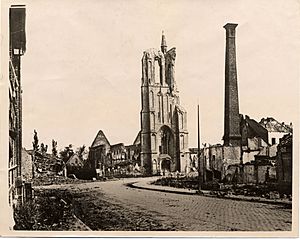 There are 70 to 80 stores in Vlamertinge. In Vlamertinge there is a large company Valcke that makes concrete constructions and therefore also offers employment for many people in the village.

Vlamertinge had its own municipal council and mayor until the mergers of 1977. Mayors were:

People speak of "Vlamertingse Pottebrekers"(Vlamertingisch pot crushers), and the pots that are meant here are obviously beer pots.

All content from Kiddle encyclopedia articles (including the article images and facts) can be freely used under Attribution-ShareAlike license, unless stated otherwise. Cite this article:
Vlamertinge Facts for Kids. Kiddle Encyclopedia.