Wadesboro is a town in Anson County, North Carolina, United States. The population was 5,813 at the 2010 census. It is the county seat of Anson County. 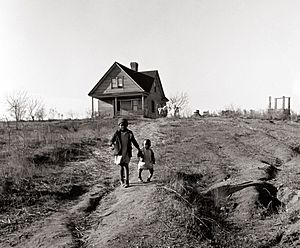 Originally called "Newtown", the town was renamed in 1783 in honor of Colonel Thomas Wade after his service with the Minutemen in the Revolutionary War.

In 1900, scientists determined that Wadesboro would be the best location in North America for viewing an expected total solar eclipse. The Smithsonian Astrophysical Observatory, then based in Washington, D.C., loaded several railroad cars with scientific equipment and headed to the town.

There were 2,303 households out of which 32.0% had children under the age of 18 living with them, 31.1% were headed by married couples living together, 25.7% had a female householder with no husband present, and 38.0% were non-families. 34.5% of all households were made up of individuals, and 16.3% were someone living alone who was 65 years of age or older. The average household size was 2.40, and the average family size was 3.09.

Steven Spielberg filmed The Color Purple in a large white farmhouse known as the Huntley House / James Bennett Plantation in nearby Lilesville. Located a few miles off U.S. Highway 74, it was used extensively as the main exterior location in that film. Most of the town scenes were done in Marshville; the store is an actual store called Apple Jacks and dirt was laid over the pavement during filming.

The film Evil Dead II was shot in Wadesboro, and the Huntley House became the production office for the film. Most of Evil Dead II was filmed in the woods near that farmhouse, or J.R. Faison Junior High School, which is where the interior cabin set was located.

All content from Kiddle encyclopedia articles (including the article images and facts) can be freely used under Attribution-ShareAlike license, unless stated otherwise. Cite this article:
Wadesboro, North Carolina Facts for Kids. Kiddle Encyclopedia.