The weedy sea dragon or common sea dragon, Phyllopteryx taeniolatus, is a marine fish related to the seahorse. It is the only member of the genus Phyllopteryx. It is found in water 3 to 50 m deep around the south coast of Australia, from Port Stephens, New South Wales to Geraldton, Western Australia. It also found in the waters around Tasmania. Weedy sea dragons are named for the weed-like growth on their bodies. This camouflage hides them as they move among the seaweed beds where they live. The weedy sea dragon is the aquatic emblem for the state of Victoria. 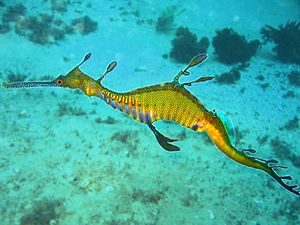 Weedy sea dragons can reach 45 cm in length. They feed on tiny crustaceans and other zooplankton, which they suck into the end of their long tube-like nose. They don't have a tail that can wrap around and hold on to things the way a seahorse can. They swim in shallow reefs and weed beds, and look like weeds drifting over bare sand.

Sea dragons, seahorses and pipe fish are the only species where the male carries the eggs. The male carries the fertilized eggs, joined under his tail. They stay there for about eight weeks until they hatch. The young can look after themselves as soon as they are born. Breeding sea dragons in captivity is rare because scientists don't know what makes them breed in the wild. Keeping sea dragons in captivity is difficult as only about 60% will survive.

The Aquarium of the Pacific in Long Beach, California, Melbourne Aquarium in Australia, and the Tennessee Aquarium in Chattanooga, Tennessee, are the only places in the world to have bred weedy sea dragons, though others have been able to get them to lay eggs.

A relative of the weedy sea dragon is the leafy sea dragon Phycodurus eques. In the November 2006, the National Geographic magazine, reported that marine biologist Greg Rouse is looking at the DNA of the two sea dragon species.

All content from Kiddle encyclopedia articles (including the article images and facts) can be freely used under Attribution-ShareAlike license, unless stated otherwise. Cite this article:
Weedy sea dragon Facts for Kids. Kiddle Encyclopedia.