Weeki Wachee is an unincorporated community and former city located in Hernando County, Florida, United States. As of the 2020 census, the community has a total population of 16. The 12,000-acre (4,900 ha) Weeki Wachee Preserve and the Weeki Wachee Springs park are located in the area. The park includes water rides, animal shows, mermaid costume shows, and manatee watching. The communities of Weeki Wachee Gardens and Spring Hill are nearby.

As of the 2000 US Census of 2000, there were 12 people, five households, and five families residing in the city. The population density was 11.8 people per square mile (4.5/km2). There were five housing units at an average density of 4.9 per square mile (1.9/km2). As identified by the census, no one in Weeki Wachee was Hispanic or Latino. All residents were White except for one Native American member of the Little River Band of Ottawa Indians Tribe.

Weeki Wachee Springs, the spring of the Weeki Wachee River, is a Florida tourist attraction where underwater performances by mermaids – women dressed in fancy outfits with fins about their legs – can be viewed in an aquarium-like setting. There are currently 15 female mermaid performers and four male performers. The attraction includes a Buccaneer Bay water park, animal shows, and boat rides. General Manager Robyn Anderson is also the town's mayor. The park is now an official Florida State Park and is owned and managed by the State Parks department.

From May 22 until August 30, 2007, the discharge level at Weeki Wachee spring dropped to a level that allowed for cave divers to gain effective entry into the cave system at the spring. The Karst Underwater Research team successfully executed exploration dives and the necessary in-water decompression to explore approximately 6,700 feet (2,000 m) in multiple passages at an average depth of 265 feet (81 m) Fresh Water (ffw) with a maximum depth of 407 ffw. 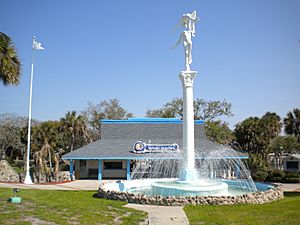 All content from Kiddle encyclopedia articles (including the article images and facts) can be freely used under Attribution-ShareAlike license, unless stated otherwise. Cite this article:
Weeki Wachee, Florida Facts for Kids. Kiddle Encyclopedia.