Spring Hill is a census-designated place (CDP) in Hernando County, Florida, United States. The population was 98,621 at the 2010 census, up from 69,078 at the 2000 census. The American Community Survey estimated the population in 2017 to be 113,508. Spring Hill belongs to Florida's Nature Coast region and is in the Tampa-St. Petersburg-Clearwater metro area. It is east of Hernando Beach, southwest of Brooksville, and north of Tampa.

Spring Hill first appeared on Hernando County maps in the mid-1800s along what is today Fort Dade Avenue just north of the community of Wiscon. The modern Spring Hill was founded in 1967 as a planned community, which was developed by the Deltona Corporation and the Mackle Brothers who built the community. The plans for the community are actually identical to the community of Deltona, Florida. The Mackle Brothers sold many of the properties and land in the area through intense advertising. It appeared on maps of Florida as early as 1856. It has since become a sprawling semi-city in its own right, though it is an unincorporated area. The main entrance to the original development is marked by the Spring Hill waterfall on Spring Hill Drive and U.S. Route 19 (Commercial Way). Its location has Hernando Beach to the west, Brooksville, Florida to the east, and Tampa to the south via the Suncoast Parkway, US 41, and I-75.

Spring Hill's proximity to Tampa, approximately 35 miles (56 km) south, and the completion of the Suncoast Parkway in 2001 have made it easily accessible to the Tampa-St. Petersburg area.

JCPenney opened a store on U.S. Route 19 (Commercial Way), just south of Spring Hill Drive in Spring 2008, adjacent to the store is a 250,000-square-foot (23,000 m2) shopping center that include many stores and restaurants, including: Best Buy, Cracker Barrel, Office Depot, Ross & Sports Authority. A Kohl's on Spring Hill Drive, just east of the Suncoast Parkway opened in Fall 2008; a Target was constructed at the same location and opened in July 2009. Just a few miles south of Kohl's and Target off of the Suncoast Parkway at County Line Road and Anderson Snow Road is a new plaza called The Shoppes of Avalon. Their anchor store is Publix which opened fall of 2009. There is also a Nail Star, China Star & Leo Liquors. The newest businesses that have opened on SR 50 are Five Guys, Texas Roadhouse, Panera Bread, HHGregg, Marina and a Burger King.

Nearby Weeki Wachee Springs is home to the famous live mermaid show and Florida's only spring-fed water park, Buccaneer Bay.

For the period 2013-17, English spoken as a first language accounted for 85.7% of the population, while 14.3% spoke other languages as their mother tongue. The most significant were Spanish speakers who made up 10.0% of the population. 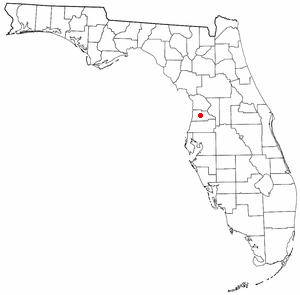 Bus service in Spring Hill is provided by THE Bus (The Hernando Express), which serves as Hernando County's main bus system, servicing both Spring Hill and Brooksville. Started in 2002, THE Bus has three main routes, two of which serve the main thoroughfares of Spring Hill, such as Spring Hill Drive and Mariner Boulevard. 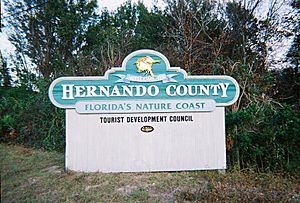 There are several county roads in Spring Hill that serve as major thoroughfares for traffic traveling around and passing through Spring Hill. Below is a list of the county roads that pertain to Spring Hill:

Spring Hill is bordered to the west by US 19 (named Commercial Way), and to the north by SR 50 (named Cortez Boulevard). The Suncoast Parkway (SR 589) is a toll road that passes through Spring Hill and serves as a connection to Pasco and Hillsborough counties (and, by extension, Tampa) to the south.

Spring Hill has many schools, both public and private, which provide primary and secondary education to local children. There are also several options for higher education that are easily accessible from the Spring Hill area.

In addition to the public schools in Spring Hill, there are several private schools:

Spring Hill is home to the 100,000-square-foot (9,300 m2) Spring Hill Campus of Pasco–Hernando State College. This was the fourth campus built out of the five now in existence.

All content from Kiddle encyclopedia articles (including the article images and facts) can be freely used under Attribution-ShareAlike license, unless stated otherwise. Cite this article:
Spring Hill, Florida Facts for Kids. Kiddle Encyclopedia.