Patterson is a town in Putnam County, New York, United States. The town is in the northeast part of the county. Interstate 84 passes through the southwest part of the town. The population was 12,023 at the 2010 census. The town is named after early farmer Matthew Paterson. The reason Patterson was spelled with two "t"s was due to the looseness with which Paterson spelled his own last name.

The town was first settled around 1720 in The Oblong, which was a disputed area in southeastern New York also claimed by the colony of Connecticut. The Oblong was a strip of land approximately 2.9 km wide between Dutchess County New York and Connecticut, ceded to New York in the 1731 Treaty of Dover. Between 1720 and 1776 a large number of mostly Connecticut families settled in the southern Oblong who could not settle west of it because that land was privately owned by the Philipse Family, who owned virtually all of the rest of the future Putnam County. The first such settlers were the Hayt family, who built a house at The Elm in 1720. Another early settler was Jacob Haviland, who settled Haviland Hollow in 1731. The first village in Putnam County, the hamlet of Patterson, was originally called Frederickstown, which lent its name to the eastern part of the future Putnam County other than the oblong, which was called Southeast Precinct (not the same as the current town of Southeast). 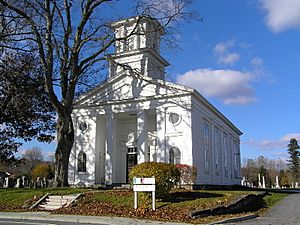 There were 3,529 households out of which 41.3% had children under the age of 18 living with them, 63.0% were married couples living together, 9.6% had a female householder with no husband present, and 24.1% were non-families. 18.6% of all households were made up of individuals and 5.2% had someone living alone who was 65 years of age or older. The average household size was 2.86 and the average family size was 3.29. 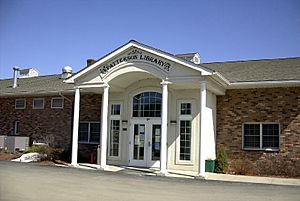 Two main thoroughfares run through Patterson, NY State Route 22 & State Route 311. State Route 22 runs through every town on the East side of Putnam County, and runs directly through the Business District of Patterson. I-84 passes in the southwest and houses Exit 18 for Route 311. Metro-North Railroad has rail commuter rail service to New York City via the Harlem Line, with the Patterson train station in the town center.

Communities and locations in Patterson 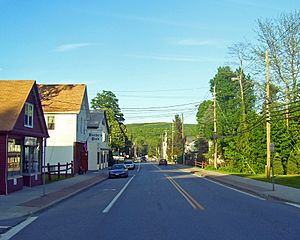 Looking east along NY 311 through downtown

All content from Kiddle encyclopedia articles (including the article images and facts) can be freely used under Attribution-ShareAlike license, unless stated otherwise. Cite this article:
Patterson, New York Facts for Kids. Kiddle Encyclopedia.