Southeast is a town in Putnam County, New York, United States. The population was 18,404 at the 2010 census. The town is in the southeast part of the county, and contains the village of Brewster within its borders. Interstate 84, Interstate 684, U.S. Route 202, US Route 6, and NY 22 are the primary routes through the town.

The first settler arrived around 1730. The area first exploited was called "The Oblong," and was outside of the land claimed by the Philipse Patent. Due to a border dispute between New York and Connecticut, the area between the undisputed border of New York and the undisputed border of Connecticut was an approximately 4-mile-wide (6 km) area which ran the full north-south dimension along the state line, in what are now Westchester, Putnam, Dutchess, and Columbia Counties. This was called the Oblong. Land was sold in this area both by the governor of New York and the King of England for Connecticut, with conflicting deeds. The boundary was settled in New York's favor by the 1731 Treaty of Dover.

A small portion of The Oblong, namely the portion in the Philipse Patent (now Putnam County), was alternately known as Southeast as it was the southeasternmost town in Dutchess County. It consisted of the 4-mile-wide section of land along the Connecticut border, going the full north-south dimension of what is now Putnam County, i.e. the eastern part of the current town of Patterson, and the eastern part of the current town of Southeast. The western parts of those two current towns were part of the large Phillipse Patent which had not yet been divided into towns. 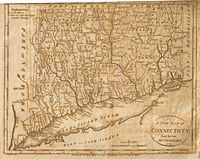 A 1799 map of Connecticut which shows The Oblong. From Low's Encyclopaedia.

The most heavily settled areas of the "Oblong" version of Southeast were the "city" of Frederickstown, now the hamlet of Patterson, and the area called Sodom. This version of Southeast was founded in 1788, and formed the southeast corner of Dutchess County. In 1795, Frederickstown, the town that had been Southeast's neighbor, was divided into the present towns of Carmel, Kent, and Patterson, the latter two known at first as "Frederick" and "Franklin", and at the same time, Southeast lost its northern half to Patterson, and expanded to the west to become the shape it is now. Putnam County split from Dutchess in 1812. The most densely populated area in the town today is the village of Brewster.

The first "South East" post office was established in 1797, when the town was still a municipality in Dutchess County. On June 12, 1812, the county of Putnam was established from six Dutchess County towns: Carmel, Kent, Patterson, Philipstown, Putnam Valley and Southeast. These two dates provide a frame of reference for the dates of operation of each Southeast post office.

Before the establishment of centralized post offices, local offices were established in general stores, railroad depots and other public venues in densely populated areas. In Southeast, there were nine individual post offices, each with distinctive postmarks:

By September 1968, the last of these local offices was closed, and the only post office for the town of Southeast and village of Brewster was located at 20 Main Street with the postmark "Brewster, New York 10509". In the 1990s this USPS branch relocated to 3 Mount Ebo Road in the Doansburgh section of Southeast, no longer in the village of Brewster, but retained the "Brewster 10509" name and ZIP code. 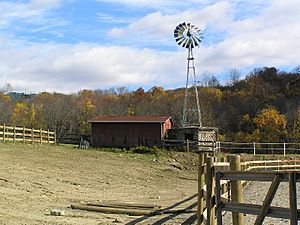 The windmill at Tilly Foster Farm

There were 6,184 households, out of which 37.5% had children under the age of 18 living with them, 61.9% were married couples living together, 8.7% had a female householder with no husband present, and 26.1% were non-families. 20.6% of all households were made up of individuals, and 6.5% had someone living alone who was 65 years of age or older. The average household size was 2.77 and the average family size was 3.22. 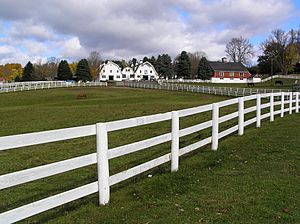 Communities and locations in Southeast 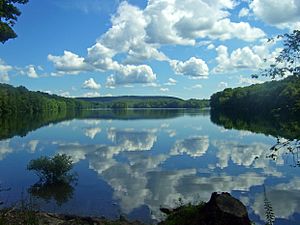 All content from Kiddle encyclopedia articles (including the article images and facts) can be freely used under Attribution-ShareAlike license, unless stated otherwise. Cite this article:
Southeast, New York Facts for Kids. Kiddle Encyclopedia.