Westchester Square is a residential neighborhood geographically located in the eastern section of the borough of The Bronx in New York City. The neighborhood is part of Bronx Community Board 10. Its boundaries, starting from the north and moving clockwise are: East Tremont Avenue and Silver Street, Blondell Avenue and Westchester Creek to the east, Waterbury Avenue to the south and Castle Hill Avenue to the west. The main roadways into and out of Westchester Square are East Tremont Avenue, Westchester Avenue and Williamsbridge Road. ZIP codes include 10461 and 10462. The area is patrolled by the 45th Precinct located at 2877 Barkley Avenue Bronx, New York 10465.

The village was founded about 1654 by English settlers who left New Haven Colony for Dutch New Netherland, on land purchased by Thomas Pell in 1654 from the sachem Ann-hock, alias Wampage, and other Native Americans, although his right to do so was disputed by the Dutch who also laid claim to the land. The settlers followed the Westchester Creek to a path behind what is now Herbert H. Lehman High School to where the Square is now. The settlement was called Oostdorp, or East Towne, and called Westchester by the English settlers.

In a war in 1655 between the Dutch and Native Americans, the settlers of Oostdorp where suspected by the Dutch of working with the Esopus and Wappinger Indians and being instigators, so as to drive the Dutch from the area. In addition, they were in communication with the New Haven Colony, which drove Peter Stuyvesant to order their removal and the destruction of their homes in March 1656. Twenty-three men were placed on board the ship de Waagh (the Scales) and taken to New Amsterdam, where they were held prisoner on the ship Ballance and "fed with rotten provision, creeping with worms, whereby some of them remained diseased to this day, after which they were carried away in chaines and laid in their dungeon at Manhatoes." Shortly afterwards, the settlers agreed to submit to Dutch law and authority and were permitted to remain at Westchester. Thomas Wheeler, Thomas Newman, and John Lord were selected as the first magistrates. At that time, the town consisted of 25 men and 10-12 women. 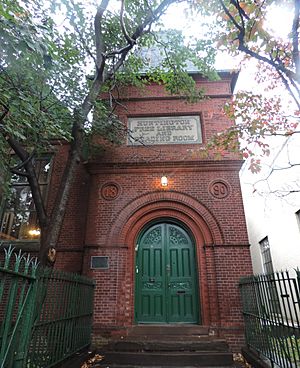 The village was the town seat of the Town of Westchester (the town hall being located at 40°50'33.91"N73°50'39.68"W) until 1895, when that town became part of greater New York City. The Square is still laid out like a village, with the Owen Dolen Plaza, previously the village green, once again a central feature of the community. It maintained a rural and small town atmosphere until 1920, when the Lexington Avenue IRT elevated line extended to Westchester Square, although there are still many 19th Century homes throughout the neighborhood, including several old Victorian mansions. The Huntington Free Library and Reading Room is a time capsule of 19th Century Westchester Square history, and is largely unchanged from its opening in the 1890s. From an economic standpoint, the Westchester Square B.I.D. (Business Improvement District) was formally signed into law in March 2012. Headed up by business owner John Bonizio, the B.I.D. which is funded by landlords and shopkeepers who pay a special property tax assessment to the city, helps to patrol and promote the immediate shopping corridor. 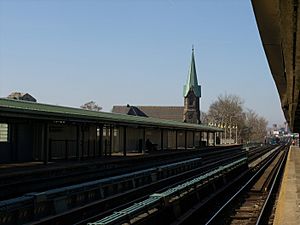 Looking west bound on the Westchester Square platform with St. Peter's church in the distance.

All content from Kiddle encyclopedia articles (including the article images and facts) can be freely used under Attribution-ShareAlike license, unless stated otherwise. Cite this article:
Westchester Square, Bronx Facts for Kids. Kiddle Encyclopedia.