Westwood (known as "The Hub of the Pascack Valley") is a borough in Bergen County, New Jersey, United States. As of the 2010 United States Census, the borough's population was 10,908, reflecting a decline of 91 (-0.8%) from the 10,999 counted in the 2000 Census, which had in turn increased by 553 (+5.3%) from the 10,446 counted in the 1990 Census. Westwood is part of the New York metropolitan area. Many of its residents regularly commute to New York City for work and leisure, many using public transportation.

Westwood was officially incorporated as a borough on May 8, 1894, from portions of Washington Township, early during the "Boroughitis" phenomenon then sweeping through Bergen County, in which 26 boroughs were formed in the county in 1894 alone. Isaac D. Bogert served as the first mayor of the Borough. In April 1909, Westwood was enlarged through the annexation of the "Old Hook" section of the borough of Emerson, and on September 24, 1957, portions of the borough were exchanged with Emerson.

The Lenni-Lenape Native Americans inhabited this part of the state and shared it with the transient hunters and trappers until the permanent settlers began to enter in mid-18th century. In the early 19th century, the area that would later become Westwood was within the larger political boundaries of Harrington Township, which had been established by royal charter in 1775. In 1840, the western half of Harrington Township became Washington Township, with the Hackensack River as the dividing line. Washington Township was an agrarian region with isolated farmsteads. Early families, including the Hoppers and Ackermans, are buried at the Old Hook Cemetery. An 18th-century mill was situated at the dammed stream near the intersection of today's Mill Street and First Avenue. This mill was on an important east west pathway and was the first on Musquapsink Brook. The mill was largely destroyed after a fire set by an arsonist and was dismantled in 1910. 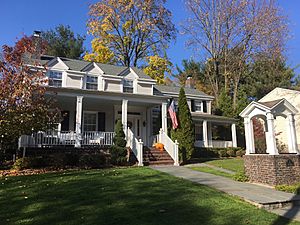 2 1st Ave Westwood NJ Built in 1773. Owned by the Bogert family till 1910. currently owned by the Sandt Family. 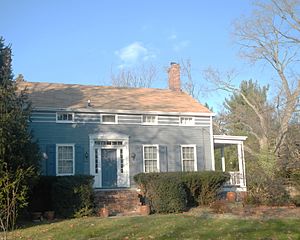 A brief description of Washington Township written in 1844 described it as a township with six stores, four schools for 135 students, six grist mills, and 14 saw mills.

The first wave of concentrated development took place as the result of the coming of the Hackensack and New York Railroad in 1870, which followed the route of today's Pascack Valley Line. On March 5, 1870, service began between Westwood and New York City (via Jersey City and a ferry ride). Several small hotels were built near the depot, and in 1872 several houses in the latest European-influenced styles began to be built along Centre Avenue. Old maps show that growth occurred simultaneously on the land both to the east and west of the tracks. The commercial buildings included lumber and coal sheds, stores, and a bakery. There was a chapel on the corner of Third and Park Avenues. The triangular park that has played an important role as a place of community gatherings is also shown on the 1876 map.

By the 1880s, Westwood had four factories, several distilleries, a new school, a laundry and grocery store, and a new Reformed Church. In 1890, following a meeting of interested residents, those favoring the incorporation of Westwood as an independent borough conducted a petition drive. In 1894, Westwood separated from Washington Township and became an independent borough. Elected as the borough's first mayor was Isaac D. Bogert.

In 1899, a water plant constructed by Cornelius S. DeBraun provided service to the houses that had been built along the borough's newly laid streets. By the time of the 1905 New Jersey Census, there were 234 dwellings housing a population of 1,044. 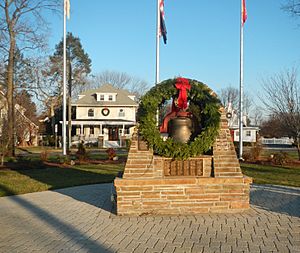 Westwood Park Place decorated for the holidays. Notice that the Fire Bell is covered with a Christmas Wreath

Lincoln High School was constructed around the turn of the 20th century, which also saw the introduction of electricity, telephones, and automobiles to the town. Underwood & Underwood Stereoscope Company opened a plant during the first decades of the 20th century, and many congregations established their first chapels, which were replaced in later years as the congregations grew in numbers and wealth. Following a typical pattern of development throughout the 20th century, the results are a mature railroad suburb almost covered with housing units, commercial, municipal and ecclesiastical buildings. The borough still retains the open space of the triangular park at its center.

There were 4,438 households out of which 29.1% had children under the age of 18 living with them, 52.0% were married couples living together, 8.7% had a female householder with no husband present, and 35.6% were non-families. 31.2% of all households were made up of individuals, and 14.1% had someone living alone who was 65 years of age or older. The average household size was 2.44 and the average family size was 3.11.

Downtown Westwood has a sidewalk sale held every summer. People can shop indoors or outdoors during this event. There are also fun activities and games included.

For the 2010–11 school year, Ketler Elementary School, which had served K-4, was shifted to become Westwood Regional Middle School for grades 6 and 7, while the other elementary schools would all serve K through 5, and the high school was shifted to grades 8-12 (from 7–12).

Zion Lutheran School, adjacent the eponymous church founded in 1905, is a private school for students in Kindergarten through eighth grade. 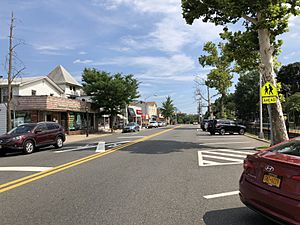 Westwood is served by NJ Transit at the Westwood train station, located at Broadway and Westwood Avenue. The Pascack Valley Line runs north–south to Hoboken Terminal with connections via the Secaucus Junction transfer station to New York Penn Station and to other NJ Transit rail service. Connections are available at Hoboken Terminal to other NJ Transit rail lines, the PATH train at the Hoboken PATH station, New York Waterways ferry service to the World Financial Center and other destinations and Hudson-Bergen Light Rail service.

Pascack Valley Hospital (PVH), a 291-bed hospital located at 250 Old Hook Road, filed for bankruptcy on September 24, 2007, and shut down on November 21, 2007. On October 1, 2008, Hackensack University Medical Center opened Hackensack University Medical Center at Pascack Valley as a satellite emergency department. As of 2013, the facility has been expanded to include 128 patient beds, all in single rooms.

People who were born in, residents of, or otherwise closely associated with Westwood include:

All content from Kiddle encyclopedia articles (including the article images and facts) can be freely used under Attribution-ShareAlike license, unless stated otherwise. Cite this article:
Westwood, New Jersey Facts for Kids. Kiddle Encyclopedia.