The white-chinned petrel (Procellaria aequinoctialis) or Cape hen, is a large shearwater in the family Procellariidae. It ranges around the Southern Ocean as far north as southern Australia, Peru and Namibia, and breeds colonially on scattered islands.

The white-chinned petrel is a member of the genus Procellaria, and in turn is a member of the family Procellariidae, and the order Procellariiformes. As a member of the Procellariiformes, they share certain identifying features. First, they have nasal passages that attach to the upper bill called naricorns. Although the nostrils on the petrel are on top of the upper bill. The bills of Procellariiformes are also unique in that they are split into between seven and nine horny plates. They produce a stomach oil made up of wax esters and triglycerides that is stored in the proventriculus. This can be sprayed out of their mouths as a defence against predators and as an energy rich food source for chicks and for the adults during their long flights. Finally, they also have a salt gland that is situated above the nasal passage and helps desalinate their bodies, due to the high amount of ocean water that they imbibe. It excretes a high saline solution from their nose.

Procellaria comes from two Latin words, procella "storm" and arius "pertaining to", with reference to the birds' association with stormy weather. The word petrel is derived from Saint Peter and the story of his walking on water, referring to their appearing to run on the water's surface when taking to the air. 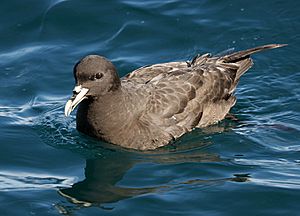 The white-chinned petrel measures 51–58 cm (20–23 in) in length, weighs 0.97–1.89 kg (2.1–4.2 lb) and spans 134–147 cm (53–58 in) across the wings. Not only is it the largest Procellaria petrel but is also the largest species in its family outside of the giant petrels. This large petrel is sooty-black and has some white on its throat and chin, more so in the Indian Ocean sector than the Atlantic. Its primaries can have a silvery appearance underneath. Its bill may be horn or yellow with a black tip, and also black between the nostrils. It has black feet. When it flies, it mixes slow wing beats with glides. Although normally quiet, it will rattle or groan while at its colony.

Their diet is composed mainly of krill followed by fish. White-chinned petrels feed by surface seizing and by undertaking shallow dives, and they will readily follow ships to collect fisheries discards, making them vulnerable to longline fisheries.

Both sexes help to build a nest, and will help incubate the egg. Upon hatching, both sexes again will assist in feeding and protecting the young.

A 2004 estimate placed the adult population at 7,000,000 with an occurrence range of 44,800,000 km2 (17,300,000 sq mi). Mortality of both adults and chicks due to longline fisheries has caused the IUCN to classify it as vulnerable. An overall decline in population is inferred by a drop in burrow occupancy rates of 28% at Bird Island, and an 86% reduction in population at Prydz Bay. Also, monitoring on Marion Island has shown of 14.5% reduction, and a 37% reduction on the Crozet Islands. Unintentional death at the hands of longline fisheries has proven to be a major contributor to the overall population decline. Nearly all of the bycatch from the Namibian hake are white-chinned petrels. 10% of the South African pelagic longline bycatch and 55% of the demersal. Also, the white-chinned petrel has suffered at the hands of invasive species such as the brown rat, Rattus novegicus, and the black rat, Rattus rattus.

Several of the breeding islands are protected areas. Ongoing studies and population monitoring are occurring at South Georgia, the Prince Edward Islands, Kerguelen Islands, and Crozet Islands. Finally, they are a part of ACAP Annex I, and CMS Appendix II.

To assist in reversing the decline in population it has been proposed to continue and extend monitoring studies, trying to eliminate most invasive species, promote adoption of best practice mitigation measures at all fisheries within the range via ACAP, FAO, CCAMLR.

All content from Kiddle encyclopedia articles (including the article images and facts) can be freely used under Attribution-ShareAlike license, unless stated otherwise. Cite this article:
White-chinned petrel Facts for Kids. Kiddle Encyclopedia.