The scalloped hammerhead (Sphyrna lewini) is a species of hammerhead shark. It was first known as zygaena lewini, but is now known as Sphyrna lewini. The word Sphyrna is a Greek word meaning "hammer", which refers to the "hammer" or "cephalofoil" on its head.

It is also known as the "bronze hammerhead", the "kidney-headed hammerhead", or the "southern hammerhead". It is found in warm temperate and tropical coastal waters all around the world, between latitudes 46° N and 36° S. It is the most common Hammerhead shark.

Like all other hammerhead sharks, the scalloped hammerhead has a "hammer", which is known as the "cephalofoil", on its head. The shark's eyes and nostrils are placed on the ends of the cephalofoil. Scalloped hammerheads usually grow to the length of 1.5 to 2.7 meters long, but the longest found was 4.3 meters long. The heaviest ever found weighed 150 kilograms. They are usually olive, bronze, light brown, grey-brown or even silver-grey in colour with a white belly. The edges of the fins are usually darker on the young, but as they grow older they become more lighter.

The scalloped hammerhead was first known as Zygaena lewini. It was renamed Sphyrna lewini in 1834. It has also been known as Cestracion leeuwenii in 1865, Zygaena erythraea in 1871, Cestracion oceanica in 1913, and Sphyrna diplana in 1941. The word Sphyrna is a Greek word meaning "hammer". It refers to the shape of the shark's head.

The scalloped hammerhead is a coastal pelagic species. It is found in continental and insular shelves, and in nearby deeper water. It is found in warm temperate and tropical coastal waters all around the world, between latitudes 46° north and 36° south. It can be found down to depths of over 500 metres (1,600 ft) but is mostly found above 25 metres (82 ft). 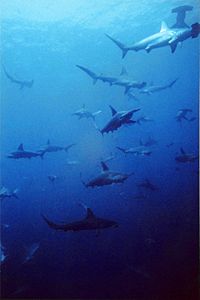 A group of Scalloped Hammerhead Sharks

During the daytime, they are usually found close to shore. At night, they hunt further from the shore. Adults are usually found alone, in pairs or in small groups, The young are found in larger groups of up to one hundred or even more members. Although scalloped hammerheads are said to be harmless towards humans, there has been reports of attacks from this shark. These attacks could be caused from the great hammerhead shark.

Scalloped hammerheads feed on fish such as sardines, mackerel, and herring. They sometimes eat cephalopods like octopuses and squids. They have also been known to eat other smaller species of sharks like the Blacktip reef shark, Carcharhinus melanopterus, and the Atlantic sharpnose shark, (Rhizoprionodon terraenovae).

Scalloped hammerheads are viviparous. Females are pregnant for 9 to 10 months before giving birth to 15 to 30 pups. Young ones grow slowly compared to other sharks. They also have darker fins than adults.

In 2008, the scalloped hammerhead was placed on the "globally endangered" list. Research has shown that in some parts of the Atlantic Ocean, populations have decreased by 95% in the last 30 years. The reason for this is because of over-fishing for shark fins. Their fins are made into shark fin soup. Researchers are calling for a ban on Shark finning, which is when the fin's of sharks are cut off and the rest of the animal is thrown back into the water to die. Hammerhead sharks are the most commonly caught sharks for finning.

All content from Kiddle encyclopedia articles (including the article images and facts) can be freely used under Attribution-ShareAlike license, unless stated otherwise. Cite this article:
Scalloped hammerhead Facts for Kids. Kiddle Encyclopedia.