Whitwarta is a town in South Australia. The town is situated beside the Wakefield River (known as Undalya to the Indigenous people) about 100 km north of the state capital, Adelaide. The name Whitwarta means freshwater (distorted from Whitarter), a reference to the freshwater springs that exist along the pronounced bend in the river nearby. The constant availability of freshwater along an otherwise dry river (the Rocks upstream of Balaklava is the next closest and permanent waterhole) meant that Whitwarta was a suitable place to establish a village. Approximately 20 people now live in the village.

Geographically, Whitwarta is situated on the plains, almost halfway between the Clare Valley and Skilly Hills to the East and the Southern Hummocks Ranges to the West. A series of salt lakes pepper the countryside to the West and North East of Whitwarta.

The old Whitwarta School (1879–1951) still stands at the northern end of the village on Bowman St, as does the Post Office at the southern end. The church and Whitwarta Hotel along the Kadina Road were damaged by floods during the 1900s, and were demolished as a consequence.

A gliding club and rifle club are both located on the outskirts of Whitwarta.

Whitwarta once had a cricket team and a tennis club.

According to the Manning Index of South Australian History, the "Nantuwwara (Nantawarra) tribe of some 25 to 30 once occupied the country from the River Wakefield, north to Whitwarta and west to the Hummock Range." The index indicates that the Nantuwarra name refers to the 'place where the kangaroo people live'.
See the article by H.M. Cooper (1961) Trans. Roy. Soc. S. Aust. (1961), Vol. 34. for information about traditional campsites in the Wakefield River region. 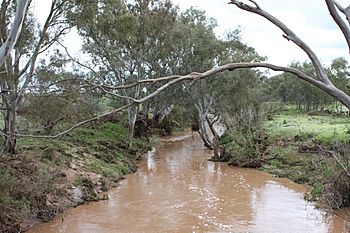 There are several accounts of major flooding of the Wakefield River at Whitwarta. The major floods recorded at Whitwarta occurred during the following years:

Two German settlers from Hamley Bridge, Johannes Rudolph Ferdinand Heopner and Elise Moeller, who married on 6 June 1878, purchased property at Whitwarta upon marriage. They purchased property 44, 45 and eight other lots of the Hundred of Stow within the township of Whitwarta. They moved to Whitwarta in an attempt to set up a successful blacksmith business, and because they saw Whitwarta as a fit place to raise children. Johannes purchased land at Whitwarta with the hope that the town and surrounding districts would boom not only because of the availability of freshwater but because it was along one of the paths ("Gulf Road") that "Bullockies" used to cart copper from Burra to Port Wakefield. However, the boom period at Whitwarta did not last for long because of the creation of a railway at nearby Balaklava.

Irrespective of lean years of business, Jonny, as he was called, made a start in the once busy town. In 1878, with the help of his mate Conny Lange, a local stonemason from Balaklava, they built a 3-roomed cottage on lot 45 Hundred of Stow. The design and layout of the house was dictated by Jonny's financial situation at the time. The house was set back nearly 50 metres from Bowman Street (named after the pastoralist Edmund Bowman) so that his blacksmith shop (constructed in 1878) could sit almost directly beside the road.

The 1878 building consisted of a kitchen, bathroom and Whitwarta's first Post Office. They slept in the Post Office room. Materials used to construct the cottage included limestone, which was quarried from section 164 Hundred of Stow and red river sand. The sand was sourced from a bed in the River Wakefield behind the cemetery. Lime was made on the building site. Kilns were set up at most building sites in the district, as it saved on transporting materials from afar. Red bricks were used around windows and as quoins.

When Jonny had secured enough wealth from his blacksmith business, and because of a growing family, he decided to have another house built in front of the 1878 house. Now known as Whitwarta House, it was built in 1912 within a year by Jonny and Conny. Materials were sourced from the same locations as those used for the 1878 house.

According to local farmer Esmond Heopner, who lived in the house when he was younger, it was regarded as "a very modern house for its time." A modest and "quiet fellow citizen", the house reflected his standing in the community. The six-roomed house comprised a parlour (lounge) at the front, a passageway leading to the dining room and three bedrooms. A "boys room" was located at the rear. Es Heopner tells the story that this room allowed for the boys to quickly slip down to the river for a swim just before dinner time in the hope that their mother wouldn't notice their absence. Apparently their wet hair gave it away!

Drastic alterations occurred to Whitwarta House after Jonny's death in 1942. The 1878 building fell down shortly after, and the blacksmith shop was demolished due to limestone damage. Coins dating back to 1865 were found in-between the corners of the red brick, a tradition of builders of that time. Coins have recently been found behind the fireplaces in the house as well.

Jonny was a very religious man who belonged to the Lutheran congregation in Balaklava. It is said that he was one of the first to develop the stump-jump plough (a labour saving device to remove mallee tree stumps), for which he was awarded a medal for exhibiting it at the Port Wakefield Agricultural and Horticultural Society in 1885. Others, like Smith from Maitland, South Australia patented the invention. The stump-jump plough is now regarded as one of the most significant inventions that changed the face of the Australian countryside as it permitted land to be cleared at an unparalleled rate.

Railway line built at Whitwarta to facilitate the construction of the Whitwarta Bridge (1914). The River Wakefield is visible in the background, as are the stables beside the Whitwarta Hotel. Image courtesy of Esmond Heopner of Whitwarta.

In 1881, the follow trades and professions for Whitwarta were recorded in Wright's Australian and American commercial directory and gazetteer.

Teachers at the Whitwarta School

Research by the University of South Australia indicates that the following teachers served at the now defunct Whitwarta School from 1879-1947:

Soon after World War I, a gathering at the school on Arbor Day, 19 August 1918, saw the unveiling of a roll of honor. It commemorated the ten old scholars who had served in the armed forces, including three who had been killed. These included Driver Eric R. Lange, who died from gunshot wounds in action in France less than two years after he enlisted with the 9th Light Horse Regiment. Another was Private Stanley Roy Angel who enlisted on 10 March 1917 and returned to Australia after the conclusion of the war, on 10 July 1919. He was also with the 9th Light Horse.

The plaque reads: This plaque is erected to commemorate the pioneers of this township before 1900. Whitwarta was named before 1850 and surveyed into 69 allotments in 1879. Apart from a number of private dwellings it had:

The cemetery is 1.5 km to the East of Whitwarta, surrounded by Aleppo Pine trees. Two of the people buried were passengers on the HMS Buffalo of the First Fleet of South Australia, John William Adams (died in 1893 aged 93) and Susanna Adams (died in 1891 aged 85). The plaque reads that these "Two pioneers of South Australia arrived with the first Governor in H.M.S Buffalo 1836 and was present at the proclamation of the colony, Dec 28, 1836."

A bridge over the Wakefield River was constructed in approximately 1884. However, by 1912, this bridge was decaying due to white ants and dry rot, and too narrow for the traffic using it.

A new bridge was opened on 14 August 1914 by the Commissioner of Crown Lands, F. W. Young, accompanied by the other members of parliament for Wooroora, Oscar Duhst and David James and the chairman of the district council, Mr. F. McArdle.

Diamond Lake, about 3 km west of the Whitwarta Village is a distinctive landscape feature of the region. It is an ephemeral salt lake. See location on Google Maps. The first Europeans to discover Diamond Lake, which they described as a 'dry lagoon', were the explorers John Hill and Thomas Burr, when passing through the Whitwarta district on 29 April 1840. A variety of wildfowl can be seen here when the Lake fills after winter rains, such as: Black Swans, Grey Teal, Chestnut Teal, Pacific Black Duck, Water Hens, and Plovers. Gypsum continues to be mined from the banks of the Lake. The Lake fills up from local rainfall-runoff, and fills from the northern lagoon first.

Historical and Contemporary Pictures of the township

All content from Kiddle encyclopedia articles (including the article images and facts) can be freely used under Attribution-ShareAlike license, unless stated otherwise. Cite this article:
Whitwarta, South Australia Facts for Kids. Kiddle Encyclopedia.