Lochiel is a small town in the Mid North of South Australia 125 km (78 mi) north of Adelaide. The town lies beside on the western edge of Lake Bumbunga and at the eastern foot of the Hummocks Range. The Augusta Highway, a section of Highway 1, runs on a strip between the township and the lake, which dwarfs the former.

The secessionist micronation, the Province of Bumbunga, was located on a farm at Bumbunga, near Lochiel, during the 1970s and 1980s.

The town is host to the 'Loch Eel', an artistic creation of rubber tyres and plastic which was created by local Gary Taylor and friends in 1972. The "eel" is located in the Bumbunga lake beside the main highway.

In 1868, the potential of Lake Bumbunga's shallow waters for natural salt mining was recognised. Salt has been harvested from the lake bed in summer months since 1881, providing employment and other economic benefits for many years. After 1913, when the Australian Salt Company was incorporated, the company and its successors, latterly trading as Cheetham Salt, have held the lake leases continuously. Profitability was improved after a 9 km branch line was built from the nearby broad-gauge railway line, enabling transport directly to Port Adelaide. Lochiel itself is said to have "developed slowly with the industry, its survival in the 20th century being almost totally dependent on the salt harvesting".

In 2011, about 270 million tonnes of lignite (brown coal) were estimated to be in a deposit north of Lochiel in seven seams from 70 to 110 metres underground. The seams' thickness varied from 0.3 to 3.0 metres, for a total of 9.4 metres. The site was considered to be favourable because it lies only 6 km (4 mi) from the railway line to Adelaide, Darwin and Perth. The deposit was not subsequently developed. 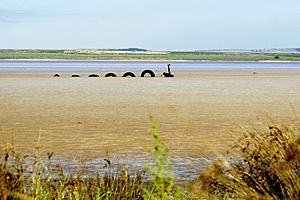 The "Loch Eel" sculpture in the shallows of Lake Bumbunga

All content from Kiddle encyclopedia articles (including the article images and facts) can be freely used under Attribution-ShareAlike license, unless stated otherwise. Cite this article:
Lochiel, South Australia Facts for Kids. Kiddle Encyclopedia.