Bumbunga is a locality in the Mid North of South Australia 125 kilometres (78 mi) north of Adelaide. It lies 5 kilometres (3.1 mi) east of Lake Bumbunga.

According to anthropologist Norman Tindale the name was derives from parnpangka, the local indigenous (Kaurna) term for 'rain water lake', referring to Lake Bumbunga.

The town administration falls under the control of the Wakefield Regional Council for local governance. Bumbunga lies in the state electoral district of Frome and in the federal electoral division of Grey. 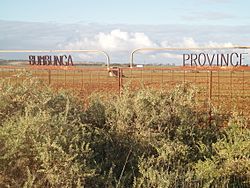 An east-facing 2006 photograph of an entrance to the former micronation, Province of Bumbunga

The secessionist micronation Province of Bumbunga was located in Bumbunga for approximately a decade in the 1970s and 1980s.

All content from Kiddle encyclopedia articles (including the article images and facts) can be freely used under Attribution-ShareAlike license, unless stated otherwise. Cite this article:
Bumbunga, South Australia Facts for Kids. Kiddle Encyclopedia.