Snowtown is a town located in the Mid North of South Australia 145 km (90 miles) north of Adelaide and lies on the main road and rail routes between Adelaide and Perth — the Augusta Highway and Adelaide-Port Augusta railway line. The town's elevation is 103 metres (338 feet) and on average the town receives 389 mm of rainfall per annum.

The settlement of Snowtown by non-indigenous Australians initially grew up around a railway station on the Brinkworth-Wallaroo line. Located on what was traditionally the land of the Kaurna (indigenous) people, the first pioneers arrived sometime between 1867 and 1869 due to the rapid expansion of farming to the north of the area. During this period one of the first major structures, the old Snowtown Pub was built in 1868. north of Port Wakefield. This farmland, according to the publication, contained the farming stations of Barunga, Bumbunga and Wokurna and consisted of "salt lakes and lagoons, dense scrub, with mallee, pine and bushes, grassy plains and saltbush, well grassed spurs and hills, with oaks and wattle on the Broughton River."

The Government only started showing interest in the settlement as late as 1869 when it planned to establish various new towns throughout the district and to divide the land into much smaller holdings. Snowtown's charter was formally proclaimed by the then Governor of South Australia, Sir William Jervois, in 1878. Jervois named the town after one of the members of the Snow family who were his cousins and lived on Yorke Peninsula (which lies immediately west and southwest of Snowtown). It is officially considered that the town was named after Thomas Snow, who became Jervois's aide de camp when he received his posting in South Australia.

During the 1970s and 1980s, the secessionist micronation of Bumbunga Province existed on farmland owned by the Brackstone family, 15 kilometres (9.3 mi) south of Snowtown.

Snowtown is situated approximately 7 kilometres east of Barunga Gap, South Australia, a cleft between the Barunga and Hummocks ranges. The excess rainfall from these hills collects in Lake Bumbunga, directly south of the township, and in a trail of smaller lakes stretching north of the town to Lake View near the main highway and railway line. Beyond the eastern edge of the township is the Snowtown Golf Course and a swampy region populated by saltbush and other salt-tolerant flora. 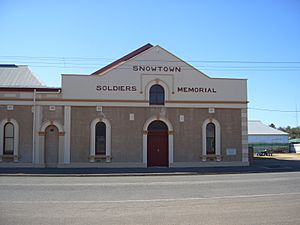 The town's main street, Fourth Street contains most of the town's civic buildings, notably the Snowtown Memorial Hall (built 1919) which is attached to the Old Institute (built 1889).

In 2008, a monument in the form of a 44-metre wind turbine blade was installed at the intersection of Fourth Street and Railway Terrace East.

The main north-south road running just outside the western edge of the town was designated to form part of Australia's Highway 1 in 1955.

The Brinkworth–Kadina railway line opened in 1879.

The Salisbury-Redhill broad railway gauge line was opened in 1925 and intersected the town along a north-south axis. In 1982 the line was converted to standard gauge, making it a part of the Adelaide-Port Augusta railway line.

In 1879 Mrs Lamb opened a Provisional School in Snowtown with a total enrolment of 14 pupils. During its lifetime agricultural science has been a particular focus for the school.

In 1961 the school became an area school known as Snowtown Area School and was located on 4.5 hectares (11 acres) of land, with an additional 10 hectares (25 acres) of land used for agricultural studies.

In the 1970s and 1980s, the school's respected agricultural credentials drew students from neighbouring communities. The school provided many entries into Royal Adelaide Show livestock and horticulture competitions, especially the sheep and beef cattle categories. In the early 1980s the school became a poll dorset sheep stud called 'SASdor' for several years.

Pupil enrolments at Snowtown Area School in 2006 totalled 118, with many pupils also travelling from nearby Lochiel, Barunga Gap and Redhill. pupils were also able to study via distance education through the Open Access College at Marden (Adelaide) or via larger neighbouring schools to increase their range of subject choices.

By 2012, the fall in enrolments, and consequent drop in funding, led to the ceasing of senior enrolments at the commencement of the 2013 school year. The school was subsequently renamed to Snowtown Primary School.

All content from Kiddle encyclopedia articles (including the article images and facts) can be freely used under Attribution-ShareAlike license, unless stated otherwise. Cite this article:
Snowtown, South Australia Facts for Kids. Kiddle Encyclopedia.