Port Broughton is a small South Australian town located at the northern extent of the Yorke Peninsula on the east coast of Spencer Gulf. It is situated about 170 km north west of Adelaide, and 56 km south of Port Pirie At the 2011 census, the town of Port Broughton had a population of 982.

The close proximity (two hours drive from Adelaide) makes it a popular tourist destination, with the number of people in town swelling to over 4000 in the summer holidays.

The land around Port Broughton was initially used for grazing, however the local conditions were unsuitable and the land was divided up into acre lots and sold.

Port Broughton was surveyed in 1871 to service the surrounding wheat and barley growers on the recommendation of Captain Henry Dale. It is on a sheltered inlet called Mundoora Arm Inlet at the extreme northern end of Yorke Peninsula. The town is named after the Broughton River (named by Edward John Eyre after William Broughton), the mouth of which is about 40 kilometres (25 mi) north of the township. 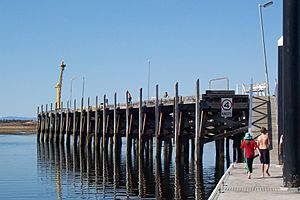 The face of the 'T'-shaped jetty at Port Broughton

Built in 1876, the 'T'-shaped jetty was serviced by an isolated narrow gauge railway line from Mundoora, 16 km inland and uphill. The Port Broughton railway line, officially opened on 11 March 1876, brought the grain down to the port. Horses were used to tow the empty wagons uphill, but they were sent downhill powered only by gravity, with a driver to operate the brakes. The passenger service ceased on 17 September 1925, but the grain traffic continued. During January, 1926, a Fordson rail tractor displaced the animal power. From 1931, the railways contracted out the service to a private operator.

The service ceased altogether on 3 August 1942, but the tractor continued to shunt wheat wagons between the station yard and the jetty until moved elsewhere. Ketches carried the grain from the jetty 8 kilometres out into the gulf where the larger windjammers were anchored to carry the grain back to England. The windjammers ceased to call in 1949.

Locomotives were proposed in 1906.

Lying on the eastern side of Spencer Gulf, Port Broughton's coastline is relatively protected, resulting in large expanses of shallow water and seagrasses, tidal flats and vast areas of mangroves that flank the inlet on which the town is built. The small town of Fisherman Bay lies 5 km north of Port Broughton and has much the same coastal features. Between the mouth of Fisherman Bay and Port Broughton lies Shag Island, an important breeding site for several species of cormorant. The Broughton River lies further north toward Port Pirie, where its estuary is located. Further inland, most of the land is fairly featureless farming country, with only fragments of the original vegetation remaining.

The town has a number of sporting clubs including Cricket and Netball clubs, and an Australian rules football club playing in the Northern Areas Football Association as the Broughton-Mundoora Eagles.

All content from Kiddle encyclopedia articles (including the article images and facts) can be freely used under Attribution-ShareAlike license, unless stated otherwise. Cite this article:
Port Broughton, South Australia Facts for Kids. Kiddle Encyclopedia.