Wilbur is a town in Lincoln County, Washington, United States. The population was 884 at the 2010 census.

Just prior to the construction of the Central Washington Railroad line in 1889, no towns existed west of Davenport in Lincoln County. One place along the line, "Wild Goose Bill's Ranch", run by Samuel Wilbur Condin, was assigned a post office by the Federal government. It had been located on the stage line between Davenport and the Mines in northern Washington and with the speculation of the railroad arriving soon seemed a likely place for a town. The town grew in earnest and was platted in April 1889 by Condin. With the arrival of the railroad later that year, Wilbur's growth increased rapidly with the establishment of bigger hotels, a bank, a lumber mill and countless other businesses. After several failed attempts to incorporate in 1889, Wilbur was officially incorporated on August 11, 1890. The boom had slowed by 1891 and came to a halt with the Panic of 1893.

Wilbur was brought out of the hard times of the 1890s during a record wheat harvest in 1897 which brought over $1,000,000 to circulation in the town. The construction of a road to Republic then a flourishing mining camp in what was to become Ferry County was expected to increase traffic to Wilbur, but the expected benefit never materialized. After a fire in 1901 destroyed several city blocks, a water works was established. Wilbur was electrically lighted in October 1903 by the Wilbur Electric Company.

Wilbur has gained news coverage recently as a result of crop circles found roughly 10 miles north of town, just off of Highway 2. The origin of these depressions in the wheat crop of local farmer Jim Llewellyn is unknown, and the phenomenon was covered by new stations as well as newspapers. See this link: [1] On July 31, 2012, more crop circles appeared in wheat fields in the town. The story wasn't on TV news channels until August 1, 2012. 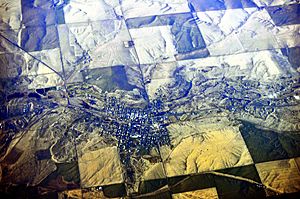 Wilbur is situated in an oblong basin with Goose Creek, also named for Wild Goose Bill, running through the center of the town, and abrupt, basaltic cliffs, not of very great elevation, on the north and south. At one time this spot was, evidently, a lake.

According to the United States Census Bureau, the town has a total area of 1.37 square miles (3.55 km2), all of it land.

Wilbur has a semi-arid climate (BSk) closely bordering a humid continental climate (Dsb), according to the Köppen climate classification system.

There were 404 households, of which 22.8% had children under the age of 18 living with them, 50.7% were married couples living together, 5.7% had a female householder with no husband present, 3.7% had a male householder with no wife present, and 39.9% were non-families. 35.1% of all households were made up of individuals, and 20% had someone living alone who was 65 years of age or older. The average household size was 2.16 and the average family size was 2.81.

All content from Kiddle encyclopedia articles (including the article images and facts) can be freely used under Attribution-ShareAlike license, unless stated otherwise. Cite this article:
Wilbur, Washington Facts for Kids. Kiddle Encyclopedia.