Wildlife of the Philippines facts for kids 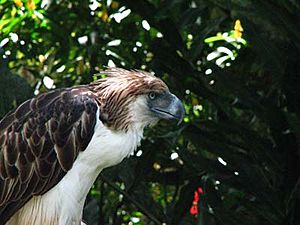 The wildlife of the Philippines includes a significant number of endemic plant and animal species. The country's surrounding waters reportedly have the highest level of marine biodiversity in the world. The Philippines is considered as one of the seventeen megadiverse countries as well as global biodiversity hotspot. In the 2000 Red List of the International Union for the Conservation of Nature and Natural Resources (IUCN), 418 of the country's 52,177 species were listed as threatened.

The Philippines has among the highest rates of discovery in the world with sixteen new species of mammals discovered in the last ten years. Because of this, the rate of endemism for the Philippines has risen and likely will continue to rise. 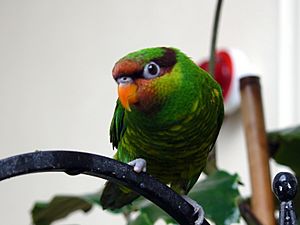 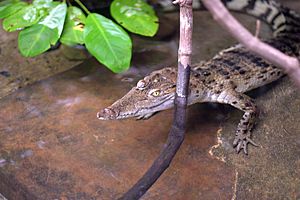 The endemic freshwater Philippine crocodile is critically endangered and is considered the most threatened crocodilian in the world. In 1982, wild populations were estimated to be only 500-1,000 individuals; by 1995 a mere 100 crocodiles remained living in the wild. The recent discovery of a population of this species in the Sierra Madre mountains of Luzon brings new hope for its conservation. Projects were being made in an effort to save the crocodiles. The Crocodile Rehabilitation, Observance and Conservation (CROC) Project of the Mabuwaya Foundation is active in carrying out such projects.

Other unique and threatened reptiles include Gray's monitor and the Philippine forest turtle. There are two newly discovered species of frugivorous monitor lizard, the Panay monitor lizard from the island of Panay and Northern Sierra Madre forest monitor from north east Luzon, there are only three species of monitor lizards that are specialized frugivores. 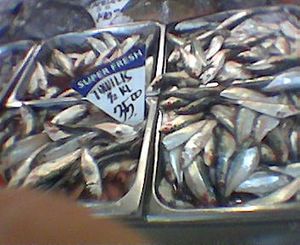 Bins of S. tawilis for sale at a Metro Manila supermarket

The Philippines has about 330 freshwater fish, including nine endemic genera and more than 65 endemic species, many of which are confined to single lakes. An example is Sardinella tawilis, a freshwater sardine found only in Taal Lake. Unfortunately, Lake Lanao, in Mindanao, seems to be experiencing the country's most catastrophic extinction event, with nearly all of the lake’s endemic fish species now almost certainly extinct, primarily due to the introduction of tilapia, which is an edible fish, for the expansion of the fishing industry. Other exotic species were also introduced to the lake.

Insects and other invertebrates 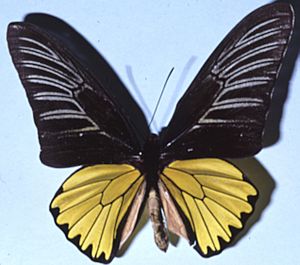 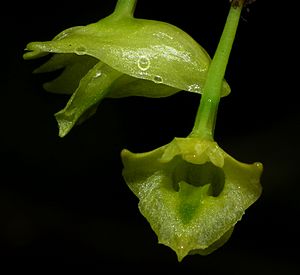 At the very least, one-third of the more than 9,250 vascular plant species native to the Philippines are endemic. There are, however, no plant families endemic to the country. The families of gingers, begonias, gesneriads, orchids, pandans, palms, and dipterocarps are particularly high in endemic species. For example, two-thirds of the 150 species of palms present in the country are found nowhere else in the world. 700 of the 1,000 species of orchids found in the Philippines are unique to its wildlife.

The broad lowland and hill rain forests of the Philippines, which are mostly gone today, were dominated by at least 45 species of dipterocarps. These massive trees were abundant to up to 1,000 meters above sea level. Other important tree species here include giant figs, which provide food for fruit bats, parrots, and monkeys, and Pterocarpus indicus, which like the dipterocarps, is valued for its timber.

A few species of Rafflesia are found in the Philippines, one of them being Rafflesia philippensis.

All content from Kiddle encyclopedia articles (including the article images and facts) can be freely used under Attribution-ShareAlike license, unless stated otherwise. Cite this article:
Wildlife of the Philippines Facts for Kids. Kiddle Encyclopedia.