William Dwight, Jr. (July 14, 1831 – April 21, 1888), was a general in the Union Army during the American Civil War. Raised in Massachusetts, he came from a notable family of military leaders.

Dwight was the second born son in a family of seven sons, three of whom, besides himself, served in the American Civil War. He was considered to be an out-spoken, boisterous, high-spirited boy, somewhat rude in his manner, sometimes troublesome, yet was said to possess a charm that made him well liked. The young Dwight also had a great love for the out door life and sport.

Starting in 1846 he attended a military preparatory school, and was admitted to the United States Military Academy at West Point, New York in 1849. However, he resigned January 31, 1853 and moved to Boston to work in manufacturing. On January 1, 1856 he married Anna Robeson. 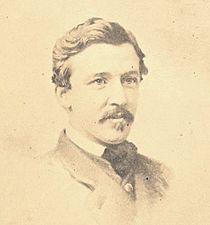 Dwight was moving to Philadelphia for his business when the American Civil War broke out. He took a commission of captain on May 14, 1861. He was promoted to lieutenant colonel on June 29, 1861 under Daniel Sickles, and full colonel on July 1, 1861. As commanding officer of 70th New York Volunteer Infantry Regiment, Dwight led his regiment during the Battle of Williamsburg, where he was seriously wounded on May 5, 1862, along with losing half of his command. Left for dead on the battlefield, Dwight was found by Confederate forces and held as a prisoner of war until his eventual release in a prisoner exchange November 15, 1862.

In recognition of his gallantry on the field, Dwight was promoted to brigadier general of volunteers to rank from November 29, 1862, by Presidential nomination on March 4, 1863, and U.S. Senate confirmation on March 9, 1863. He was transferred to the Western Theater where, later in 1863, he led his brigade in the attack of Port Hudson, Louisiana.

He served as chief-of-staff to Maj. Gen. Nathaniel P. Banks during the Red River Campaign in early 1864, with service at the Battle of Mansfield and Battle of Pleasant Hill in De Soto Parish, Louisiana, Dwight was reassigned to the Eastern Theater and was attached to the 1st Division of the 19th Army Corps. Serving under General Philip H. Sheridan, Dwight later participated in the Valley Campaigns of 1864 and saw action at the battles of Winchester and Fisher's Hill before the end of the war.

Following the war, Dwight went into the railroad business in Cincinnati, Ohio with another brother Chapman Dwight who was born April 30, 1844. He had one son, William Arthur Dwight, born June 3, 1867. William Dwight died on April 21, 1888 in Boston and was buried in Forest Hills Cemetery in Jamaica Plain, Massachusetts.

All content from Kiddle encyclopedia articles (including the article images and facts) can be freely used under Attribution-ShareAlike license, unless stated otherwise. Cite this article:
William Dwight Facts for Kids. Kiddle Encyclopedia.