The main cause of the war was slavery. Slavery was common in the Southern states, including all 11 that joined the Confederate states. It was illegal in most of the Northern states. The Confederate states tried to leave the Union after Abraham Lincoln, who disliked slavery, was elected President of the United States. The Union believed that it was illegal for the states to break away. Five states where slavery was legal stayed in the Union. These were called the "border states". The Union did not plan to abolish slavery at first, but in 1862 this became one of their goals.

The war began on April 12, 1861 when Confederate forces attacked Fort Sumter, a fort in South Carolina held by Union soldiers. It lasted four years and caused much damage in the South. Up until 1862 the war was fought mostly in the Northern states, but afterwards it was mostly fought in the Southern states. After four years of fighting, the Union won the war. After the Union won, slavery was made illegal everywhere in the United States.

When the United States of America was founded in 1776, most states allowed slavery. But over the next 84 years, the Northern states decided that slavery was a bad thing and banned it. The Southern states kept slavery legal. Slaves from Africa grew cotton in those states, which made a lot of money.

The United States became divided into slave and free states. By 1860, those states had long been growing more angry at each other. They had been arguing over whether slavery should be allowed in the lands to the west. In the late 1850s, there was fighting in Kansas between people who wanted to allow slavery in the Kansas area and people who wanted it banned. 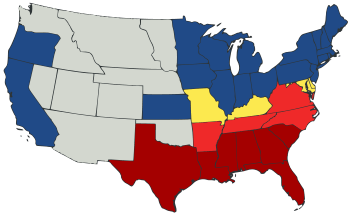 Abraham Lincoln from the Republican Party won the 1860 United States presidential election. Lincoln did not yet want to ban slavery. He thought that banning it would damage the South. But Lincoln and the Republican Party disliked slavery and did not want it to spread to the west.

Lincoln became president on March 4, 1861. After the election, seven Southern states declared their independence from the Union. The outgoing U.S. president, James Buchanan, said this was against the law, but did nothing to stop them. Lincoln and his Republican party treated this secession as a rebellion. No country ever recognized the Confederacy as its own, separate nation. This was because of diplomacy on the part of the Union, anti-slavery feelings in Europe, and the northern blockade of southern ports.

The first seven states to join the Confederacy were South Carolina, Mississippi, Florida, Alabama, Georgia, Louisiana and Texas. Four others joined after fighting began: Virginia, Arkansas, Tennessee and North Carolina. The Confederacy claimed Kentucky and Missouri belonged to them, but these states never joined the Confederacy. Kentucky, Missouri and Maryland were slave states that tried to avoid taking sides. Delaware supported the Union despite being a slave state. Also, the western counties of Virginia chose to remain in the Union, creating a new state called West Virginia.

The Confederate States claimed that they owned all forts and other federal buildings in the South. Fort Sumter was in South Carolina - one of the Confederate States. However, the fort was controlled by the Union. On April 12, 1861, Confederate forces attacked the fort. They forced the Union soldiers inside the fort to surrender. After this, President Lincoln asked every Union state for volunteers to join the Union Army. Quickly, four more southern slave states joined with the Confederates instead of supplying forces to fight them.

The blockade by the United States Navy stopped the Confederacy from selling its cotton and other goods. It also made it harder for them to buy weapons and military supplies. 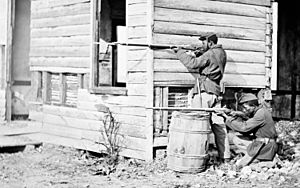 Both the United States and the Confederacy had their capital cities in the Eastern theater. Washington D.C. had been the capital of the U.S. since 1800. When the South seceded, it first named Montgomery, Alabama but soon changed to Richmond, Virginia as the capital of the Confederate States. Richmond and Washington are only about 90 miles (145 km) apart. One of the first battles of the war was fought in Virginia. This First Battle of Bull Run happened on July 21, 1861. The Confederates won the battle. The Union Army of the Potomac then tried to capture Richmond in the Peninsula Campaign during the spring of 1862. At this time, Robert E. Lee took command of the Army of Northern Virginia and defeated the Union army. He then won the Second Battle of Bull Run in August 1862. Lee tried to win the war by invading Maryland. When he lost the Battle of Antietam, he retreated back to Virginia. 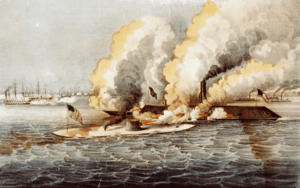 The Monitor and the Merrimack (CSS Virginia), March 9th, 1862

There was much naval warfare in the American Civil War but the Union navy was much stronger. Lincoln put the Confederates under a blockade, which meant the Union navy would not let any ships into or out of southern ports. The Confederates used ships called blockade runners to bring things from Europe. The things the Confederates brought included weapons. The navies of each side also fought on the rivers. The ships included ironclads, which were protected by iron on their sides, and cottonclads, which used cotton along its sides. During the Battle of Hampton Roads, the Confederate ironclad Virginia fought against the Union ironclad Monitor. This was the first time in world history that two ironclads fought each other. 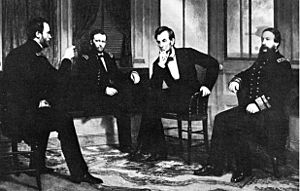 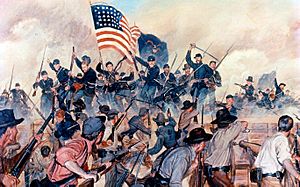 "First at Vicksburg" is part of the US Army Center of Military History "US Army in Action" series, shown here are the Confederate Lines, Vicksburg, Mississippi, May 19, 1863

The North won control of almost all of the Mississippi River. This was by capturing the cities along the river during the fall of 1862 and spring of 1863. However, the Confederacy still held Vicksburg, an important city and fort. If they held the city, the Confederates could move soldiers and supplies from one side of the river to the other. Grant started the Siege of Vicksburg during the month of May 1863. The siege continued for a long time. On July 4, 1863, the Confederates in Vicksburg surrendered to Grant. This was one of the turning points in the war, because it divided the Confederacy into two parts.

There were also battles west of the Mississippi river valley, in the Trans-Mississippi theatre. For example, two important battles were the Battle of Wilson's Creek and the Battle of Pea Ridge. The Confederates tried to invade New Mexico during February and March 1862 but they were defeated at the Battle of Glorieta Pass. After the Union captured Vicksburg, this area became separated from the rest of the Confederate states. Other battles happened in this area after the capture of Vicksburg. 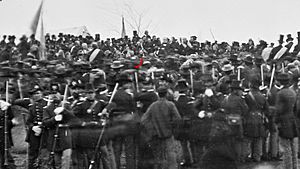 During the siege of Vicksburg in the west, another turning point came in the east. After winning some battles, Lee decided to invade the North again. Lee and his Army of Northern Virginia went into Pennsylvania. The Confederate Army met the Union Army near Gettysburg, Pennsylvania. The two armies fought the Battle of Gettysburg. This battle lasted for three days: July 1 to 3, 1863. More soldiers died at Gettysburg than in any other Civil War battle. The Union won the battle. This stopped the Confederate Army's invasion into the North. Lee and his troops were pushed back into the South.

After this, President Lincoln decided that Grant was his best general. He put Grant in control of all the Union armies. Lincoln also made William T. Sherman the general in charge of the Union troops in Georgia. Grant led many attacks on Lee's army. These battles were made up the Overland Campaign. Meanwhile, Sherman burned Atlanta and Savannah. He did this to try to make the South weaker and to make it harder for Southern people to supply the Confederate Army with food and other necessities. Sherman then marched north through South Carolina and North Carolina. Confederate general Joseph E. Johnston attacked Sherman at the Battle of Bentonville. Sherman won the battle. 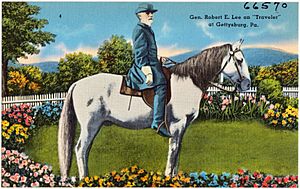 Lee held out as long as he could in Virginia. Eventually he decided that he had too few soldiers to keep on fighting the Union, which had more soldiers and supplies. Lee surrendered to Grant on April 9, 1865, near Appomattox Court House. After Lee surrendered, many other Confederate armies surrendered also. The last Confederate general to surrender was Brigadier General Stand Watie. He surrendered on June 23, 1865, in Oklahoma.

During the war, inflation was a problem in the Union and a bigger problem in the Confederacy whose government paid for the war by printing a large amount of paper money. Prices went up and everything became more expensive. Many people could not afford the higher prices and went hungry because of this. This was one thing that helped lead to the Confederacy's surrender. 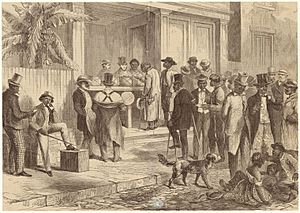 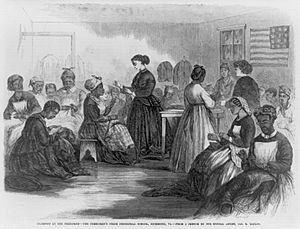 Many soldiers on both sides died during the war. Most of the war was fought in the South. Many railroads, farms, houses, and other things were destroyed and most people there became very poor. The period after the war, called Reconstruction, lasted from the end of the war until 1877. The Union Army stayed in some Southern states, making them occupied territory. Three important amendments were added on to the United States Constitution. The amendments were proposed (or suggested) by the U.S. government. Although not every American supported them, the amendments got enough support to pass:

After the war, some of the Union Army's leaders went into politics. Generals Grant, Hayes, Garfield, Harrison, and McKinley became presidents. Other veterans were elected to other offices.

The Amnesty Act of 1872 restored the rights to vote and to hold political office for most of the former members of the Confederacy. Some of them also became politicians. 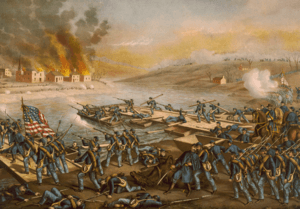 The Army of the Potomac crossing the Rappahannock River 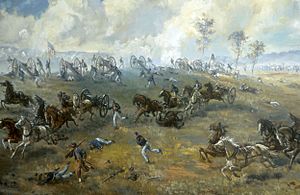 First Battle of Bull Run, one of the early battles in the American Civil War 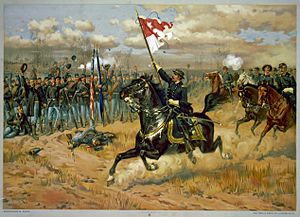 All content from Kiddle encyclopedia articles (including the article images and facts) can be freely used under Attribution-ShareAlike license, unless stated otherwise. Cite this article:
American Civil War Facts for Kids. Kiddle Encyclopedia.