Causes of the American Civil War facts for kids 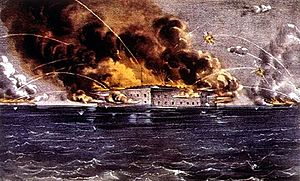 The Battle of Fort Sumter was a Confederate attack on a U.S. fort in South Carolina in April 1861. It was the opening battle of the war.

Most academic scholars identify slavery as a central cause of the American Civil War. Slavery was the central source of escalating political tension in the 1850s. The Republican Party was determined to prevent any spread of slavery, and many Southern leaders had threatened secession if the Republican candidate, Lincoln, won the 1860 election. After Lincoln won, many Southern leaders felt that disunion was their only option, fearing that the loss of representation would hamper their ability to promote pro-slavery acts and policies. 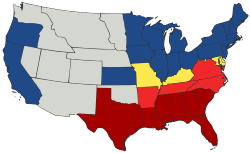 Slavery was a major cause of disunion. Slavery was illegal in much of the North, having been outlawed in the late 18th and early 19th centuries. It was also fading in the border states and in Southern cities, but it was expanding in the highly profitable cotton districts of the rural South and Southwest. The strategy of the anti-slavery North was to stop the expansion and thus put slavery on a path to gradual extinction. The slave-holding South denounced this strategy as infringing upon their Constitutional rights. Southern whites believed that the emancipation of slaves would destroy the South's economy, due to the large amount of capital invested in slaves and fears of integrating the ex-slave black population. 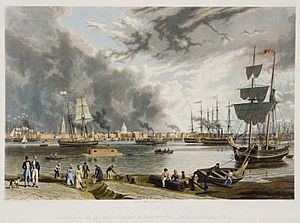 Sectionalism refers to the different economies, social structure, customs and political values of the North and South. It increased steadily between 1800 and 1860 as the North, which phased slavery out of existence, industrialized, urbanized, and built prosperous farms, while the deep South concentrated on plantation agriculture based on slave labor, together with subsistence farming for poor freedmen.

The South argued that each state had the right to secede - leave the Union - at any time, that the Constitution was a "compact" or agreement among the states. Northerners (including President Buchanan) rejected that notion as opposed to the will of the Founding Fathers who said they were setting up a perpetual union.

Between 1803 and 1854, the United States achieved a vast expansion of territory through purchase, negotiation, and conquest. At first, the new states carved out of these territories entering the union were apportioned equally between slave and free states. It was over territories west of the Mississippi that the proslavery and antislavery forces collided.

Both the South and the North came to the same conclusion: "The power to decide the question of slavery for the territories was the power to determine the future of slavery itself."

The election of Abraham Lincoln in November 1860 was the final trigger for secession. Southern leaders feared that Lincoln would stop the expansion of slavery and put it on a course toward extinction. The slave states, which had already become a minority in the House of Representatives, were now facing a future as a perpetual minority in the Senate and Electoral College against an increasingly powerful North. Before Lincoln took office in March 1861, seven slave states had declared their secession and joined to form the Confederacy.

All content from Kiddle encyclopedia articles (including the article images and facts) can be freely used under Attribution-ShareAlike license, unless stated otherwise. Cite this article:
Causes of the American Civil War Facts for Kids. Kiddle Encyclopedia.