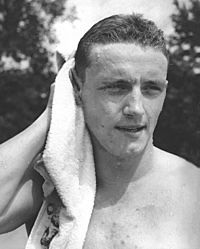 William Albert Yorzyk Jr. (May 29, 1933 – September 2, 2020) was an American competition swimmer. He was born in Northampton, Massachusetts.

Yorzyk represented the United States at the 1956 Summer Olympics in Melbourne, Australia. He was the first swimmer to win the gold medal in the new 200-meter butterfly event.

Yorzyk was a physician in the United States Air Force Medical Corps and was commissioned a captain. He won the U.S. AAU indoor championship in the 220-yard butterfly in 1958.

Yorzyk was honored into the International Swimming Hall of Fame as an "Honor Swimmer" in 1971.

All content from Kiddle encyclopedia articles (including the article images and facts) can be freely used under Attribution-ShareAlike license, unless stated otherwise. Cite this article:
William Yorzyk Facts for Kids. Kiddle Encyclopedia.