Willsboro is a town in Essex County, New York, in the United States, and lies 30 miles (48 km) south of the city of Plattsburgh. As of the 2010 census, the town population was 2,025. The town is named after early landowner William Gilliland.

During the American Revolution, British troops under John Burgoyne camped on the Bouquet River.

The region was first settled by Europeans in 1765 by William Gilliland. Originally called "Milltown" by its founder (for the sawmill he located on the falls of the Bouquet River, located in the center of the town), it was renamed "Willsborough" (subsequently shortened to "Willsboro") shortly after the Revolutionary War, in honor of the founder.

The town has always had a thriving agricultural and tourism tradition, though the Industrial Revolution made its mark in the community as well. Through much of its history, Willsboro's main employer was a paper mill (which produced the wood pulp used in the making of paper). A blue limestone quarry was also an important industry locally. The stone quarried from this mine was utilized in the construction of the Albany State Capitol and the Brooklyn Bridge.

One of the noted residents was the paper manufacturer Augustus G. Paine, Jr., who resided in Willsboro for a portion of the year, when he was not in New York, since his large business was located in Willsboro. He commissioned the architect C. P. H. Gilbert to construct the Essex County Bank in 1921. In May 1930, Paine donated a whole library to the town of Willsboro, in memory of his mother, in the sum of $150,000. Both the bank and the library were constructed by Gilbert in the Neoclassical style.

Paine also had Flat Rock Camp, his summer retreat on the shores of Lake Champlain, constructed for his family.

After the Second World War the paper industry started to decline, and when the paper mill closed in the 1960s the town faced hard economic times. In order to make up for the loss, the community relied heavily on tourist dollars, focusing on the scenic landscape, lake frontage, and lush wilderness the area offered visitors. Recently, new industries have moved to the town, most notably a wollastonite mine, curtain and furniture manufacturers, and numerous web-based service companies. Willsboro is also becoming a bedroom community for the city of Plattsburgh to the north.

The east town line, marked by Lake Champlain, is the border of Vermont. The Boquet River enters Lake Champlain in the town east of Willsboro village. 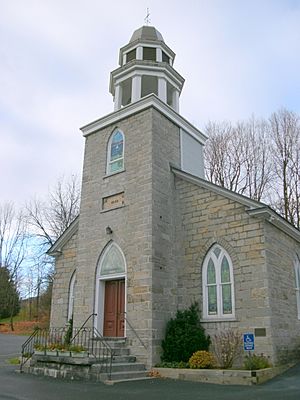 There were 803 households out of which 26.4% had children under the age of 18 living with them, 54.9% were married couples living together, 9.3% had a female householder with no husband present, and 31.6% were non-families. 24.5% of all households were made up of individuals and 14.3% had someone living alone who was 65 years of age or older. The average household size was 2.35 and the average family size was 2.77.

Communities and locations in Willsboro

All content from Kiddle encyclopedia articles (including the article images and facts) can be freely used under Attribution-ShareAlike license, unless stated otherwise. Cite this article:
Willsboro, New York Facts for Kids. Kiddle Encyclopedia.