Wilshire Center is a business improvement district and residential area in the Mid-Wilshire neighborhood of Central Los Angeles, California. 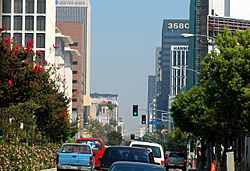 In 2001, Gary Russell, executive director of the Wilshire Center Improvement District, said: "Nobody called this Mid-Wilshire until some of the commercial real estate brokers started using that name somewhere around the 1980s," he said.

Wilshire Center is served by city buses, including several Rapid lines, and three subway stations along Wilshire Boulevard. The Metro Purple Line, which begins at Union Station in Downtown Los Angeles, has stations at Vermont, Normandie and Western Avenues, where it terminates (an extension of the Purple Line subway along Wilshire blvd to Westwood/UCLA has been approved and is scheduled to be completed in stages thru 2020) The Vermont station is also a stop on the Metro Red Line, which continues north through Hollywood to North Hollywood.

Wilshire Boulevard is named for Henry Gaylord Wilshire—a millionaire who in 1895 began developing a 35-acre (140,000 m2) parcel stretching westward from Westlake Park (MacArthur Park) for an elite residential subdivision. A socialist, Wilshire donated to the city a strip of land for a boulevard on the conditions that it would be named for him and ban public transit, railroad lines, and commercial or industrial trucking and freight trains.

A Los Angeles Times overview of the area referred to "the corridor's former glory as a haven for blue-chip corporations and fine shopping."

In the early 1900s, steam-driven motorcars started sharing Wilshire Boulevard with horse-drawn carriages. At the turn of the century, Germain Pellissier raised sheep and barley between Normandie and Western Avenues. Reuben Schmidt purchased land east of Normandie for his dairy farm.

In the mid-1990s, it had a reputation for "crime and grime," and many businesses had left the area, but by 2001 it had recovered. The Los Angeles Times noted that: "Another sign of the district's popularity emerged this summer with the opening of a plush, $35-million spa, mall and golf complex called Aroma Wilshire Center just east of Western Avenue that caters to the city's affluent Korean population, many of them entrepreneurs who own businesses in the area."

The Wilshire Center Business Improvement District - WCBID was formed in 1995 as one of the first business improvement districts in Los Angeles.

Distinguished high-rise apartment buildings and hotels were erected along Wilshire Boulevard. The lavish Ambassador Hotel was built in 1921 on 23 acres (93,000 m2) of the former site of Reuben Schmidt's dairy farm. In approximately 1929, the Academy Awards ceremony was moved from the Hollywood Roosevelt Hotel to the Ambassador Hotel. It closed in 1989 and, despite efforts of historic preservationists, has been demolished. The site is owned by the Los Angeles Unified School District, which in 2010 opened the Robert F. Kennedy Community Schools and a small park on the site. It is the most expensive public school in the United States.

The area nearby became the site of elegant New York-style apartment buildings such as the Asbury, the Langham, the Fox Normandie, the Picadilly, the Talmadge (after Norma Talmadge), the Gaylord, and the Windsor. Many film stars lived in these buildings.

Gloria Swanson's husband, Herbert Somborn, opened the Brown Derby Restaurant, a hat-shaped building at Wilshire and Alexandria, in 1926. The hat now sits on top of a restaurant in a mini-mall.

In 1929, the elegant Art-Deco Bullocks Wilshire was built at Wilshire and Westmoreland as the city's first branch department store in the suburbs. It closed in 1993 and now houses the library of Southwestern Law School.

A section of Germain Pellessier's sheep farm became the site of the Pellessier Building and Wiltern Theatre, which began construction at the corner of Wilshire and Western in 1929. The theater, operated by Warner Brothers, opened in 1931.

In 1929, the Chapman Market drew motorcars to the world's first drive-through grocery store at Sixth St and Alexandria.

The San Francisco-based I. Magnin opened a store in 1939 at Wilshire and New Hampshire.

In 2001, David Y. Lee was the largest landlord in the district, owning 20 buildings comprising about 7 million square feet of space in Mid-Wilshire and three buildings in nearby Park Mile.

In 1952, on the driving range on the south side of Wilshire between Mariposa and Normandie, the first three 12-story Tishman Plaza buildings were built in 1952 (they're now known as Central Plaza), designed by Claude Beelman.

Insurance companies began locating their West Coast headquarters in Wilshire Center because of tax incentives provided by the State. Some 22 high-rise office buildings were erected on Wilshire Boulevard from 1966 to 1976 to provide office space for such companies as Getty Oil Co., Ahmanson Financial Co., Beneficial Standard Life Insurance, Wausau, and Equitable Life Insurance. The Chapman Park Hotel, built in 1936, was torn down to make way for the 34-story Equitable Plaza office building erected in 1969. By 1970, firms such as CNA, Pacific Indemnity, and Pierce National Life were starting construction of their own high-rise buildings. Southwestern University School of Law moved from its downtown location of 50 years to a four-story campus just south of Wilshire Boulevard on Westmoreland in 1973.

In the 1970s and 1980s, commerce moved to the city's less congested Westside as well as the San Fernando Valley, and businesses and affluent residents eventually followed. I. Magnin closed, while Bullocks Wilshire held out until 1993. Rental rates in office buildings plummeted from an average of $1.65/sq ft to a dollar between 1991 and 1996; property values dropped from a high of $120/sq ft to $30 or $40 per foot in 1998.

Wilshire Center lost most of its remaining original glitter following the 1992 Los Angeles riots and the 1994 Northridge earthquake.

Subsequently, the Wilshire Center Streetscape Project [1] used federal funds to rejuvenate Wilshire Boulevard. It was one of the most ambitious and significant urban rehabilitation projects found anywhere in America and in 1999 was awarded the Lady Bird Johnson Award from The National Arbor Day Foundation. New buildings include the Aroma Center on Wilshire, which is topped by a large digital billboard, and a modern retail building facing 6th Street on the former parking lot of the Equitable Building.

Wilshire Christian Church was the first church on Wilshire Boulevard in 1911. The church property at Wilshire and Normandie was donated by the Chapman Brothers, owners of Chapman Market, whose historic building remains nearby on Sixth Street.

Some of the buildings are:

All content from Kiddle encyclopedia articles (including the article images and facts) can be freely used under Attribution-ShareAlike license, unless stated otherwise. Cite this article:
Wilshire Center, Los Angeles Facts for Kids. Kiddle Encyclopedia.