Bullocks Wilshire, located at 3050 Wilshire Boulevard in Los Angeles, California, is a 230,000-square-foot (21,000 m2) Art Deco building. The building opened in September 1929 as a luxury department store for owner John G. Bullock (owner of the more mainstream Bullock's in Downtown Los Angeles). Bullocks Wilshire was also the name of the department store chain of which the Los Angeles store was the flagship; it had seven stores total; Macy's incorporated them into and rebranded them as I. Magnin in 1989, before closing I. Magnin entirely in 1994. It is currently owned by Southwestern Law School.

The building was designed by Los Angeles architects John and Donald Parkinson; the interior design was by Eleanor Lemaire and Jock Peters of the Feil & Paradise Company; the ceiling mural of the porte-cochère was painted by Herman Sachs.

The exterior is notable for its 241-foot (73 m) tower whose top is sheathed in copper, tarnished green. At one time, the tower peak had a light that could be seen for miles around. 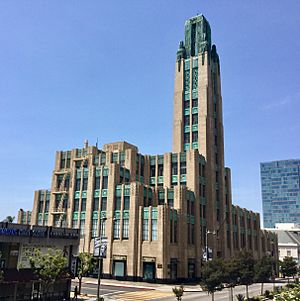 Bullocks Wilshire from the northeast.

Bullocks Wilshire's innovation was that it was one of the first department stores in Los Angeles to cater to the burgeoning automobile culture. It was located in a then-mostly residential district, its objective to attract shoppers who wanted a closer place to shop than Downtown Los Angeles. Traditional display windows faced the sidewalk, but they were decorated to catch the eyes of motorists. Since most customers would arrive by vehicle, the most appealing entrance was placed in the rear. Under the city's first department store porte cochere, valets in livery welcomed patrons and parked their cars.

Shoppers entered the foyer which had travertine floors and elevators finished in nickel, brass, and gunmetal. 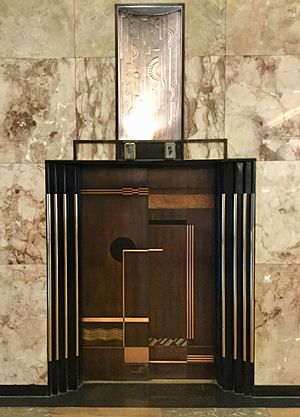 On the first floor was the vaulted Perfume Hall, awash in natural light muted by walls of St. Genevieve marble. Other floors displayed clothes and accessories in low glass cases on rosewood stands or on live mannequins, to prevent hanging racks from cluttering sight lines. Upstairs showrooms and salons functioned almost as discrete boutiques. The Louis XVI Room sold designer dresses, the Directoire formal wear and later furs. Later still came the couture Chanel Room and the Irene Salon, enclave of future Hollywood costume designer Irene Lentz, reputed to be the first boutique devoted to a single designer inside a major U.S. department store. Lentz designed custom wardrobe for celebrities, leading to a career in design at major film studios, including MGM. Other departments included toys, a mezzanine Doggery for canine accessories, and the city's first leisurewear merchandise on the Playdeck. The women's shoe salon was paneled with the wood from a single Central American tree. Cork in exotic shades lined the walls in the furs atelier. The Saddle Shop featured vermillion floor tiles, wall cases of deep red oak, and a life-size plaster likeness of a horse, Bullock's Barney. 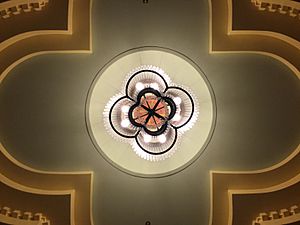 For refreshment, there was a top-floor desert-themed tearoom and the adjoining lounge where society women gathered for luncheon fashion shows. Truly elite service was reserved for the selected men invited to shop in the privacy of J.G. Bullock's wood-paneled private suite on the fifth floor. Titans of business and politics relaxed over cocktails and hors d'oeuvres as sales associates modeled potential gifts. 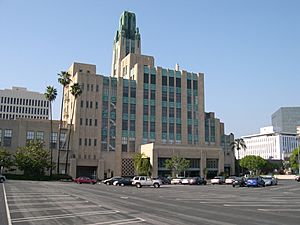 In the early 70s, this sub-division of Bullock's dropped its apostrophe and began opening separate branch locations so as to separate its decidedly luxury identity from its larger yet more upper-moderate/better parent. Branches were located in Palm Springs (1947), Woodland Hills (The Promenade) (1973; 80,000 square feet), Newport Beach (Fashion Island) (1977; 80,000 square feet), La Jolla (1979), Palos Verdes (1981), and Palm Desert (formerly Bonwit Teller; 1987; 50,000 square feet). The branches of Woodland Hills and Newport Beach were designed by the Los Angeles firm of Welton Becket and Associates. Over the years, a shift by other luxury stores and boutiques to the west side of the city/county resulted in the primary Bullocks Wilshire trading area's fall, yet the main store held on as a destination until 1988, when it began its own precipitous decline, hastened under operation by its final owners, Macy's, who had acquired the chain from the Campeau Corporation. The Wilshire Boulevard store suffered severe damage during the Los Angeles riots of 1992; looters broke in and shattered every display case on the first floor. The upper floors were not damaged because fleeing staffers shut off the elevators; the original decision to build the store without escalators may have actually saved the landmark from ruin. At least three fires were set by arsonists, but they did not spread. Bullocks Wilshire finally closed in 1993 with legal battles ensuing as Macy's stripped the store of its historic artifacts, furnishings and fixtures for other locations (bowing to pressure, almost all the 1929 fixtures were returned). Its locations had been converted around 1990 to I. Magnin, a San Francisco-based luxury chain which in turn was shuttered by Federated Department Stores in January 1995 upon its acquisition of Macy's.

Current use of building

In 1994, the building was acquired by Southwestern Law School, its long-time neighbor. The school restored the building to its original 1929 state, adapting the building for use as an integral part of the school. The building is a historic-cultural monument of the City of Los Angeles, and was listed in the National Register of Historic Places May 25, 1978.

The Southwestern Law School Office of Administrative Services is responsible for all arrangements pertaining to commercial photography and filming on Southwestern's campus and works with Unreel Locations. Scenes filmed at the building include:

Bullocks Wilshire was one of the more important divisions of Bullock's, Inc. until it was consolidated into I. Magnin by Macy's in 1989. The division could be traced to the opening of a single luxury branch store of Bullock's in 1929. In 1968, The Bullock's store in Palm Springs (built in 1947) was transferred to the control of Bullock's Wilshire to be its first branch store.

All content from Kiddle encyclopedia articles (including the article images and facts) can be freely used under Attribution-ShareAlike license, unless stated otherwise. Cite this article:
Bullocks Wilshire Facts for Kids. Kiddle Encyclopedia.