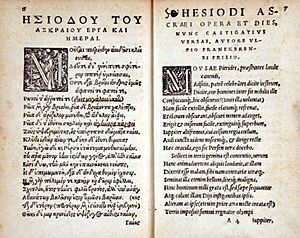 Hesiod's Works and Days, this is a printing from the 16th century

Sayings are generalized. Speculative wisdom literature are about a person, and its relationship to questions such as the meaning of life, suffering or the relationship between that person and a deity.

The Jews sometimes say the Old Testament is the Law, the Prophets, and the Writings. Included inside the Writings are Psalms and wisdom materials like Job, Proverbs, and Ecclesiastes. These wisdom books are related to certain people called "wise men" who were an important part of Israelite society. (Jeremiah 18)

All content from Kiddle encyclopedia articles (including the article images and facts) can be freely used under Attribution-ShareAlike license, unless stated otherwise. Cite this article:
Wisdom literature Facts for Kids. Kiddle Encyclopedia.