Meaning of life facts for kids 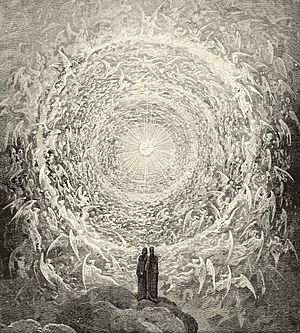 Dante and Beatrice see God as a point of light surrounded by angels; from Gustave Doré's illustrations for the Divine Comedy

Many religions, viewpoints, and creative artists have tried to find the meaning of life, but have no sensible answer. Some people say that we will never know what the meaning of life is. Many religions claim to offer some answers. There are also sets of ideas called philosophies which try to answer this question. There are also artists who paint or create sculptures to try expressing life. There are musicians who write music and writers who write stories that try to explain life.

Many have different opinions on what the meaning is. Some say life is a war zone where we are the soldiers fighting in that war for survival. Some think it is all about the relationships that we make in our life. Some people say that life is full of violence and hatred but some say that life is full of hope and happiness. Still, other people say that the meaning of life is to achieve goals you set in life. According to Douglas Adams, the answer to the question is 42. The biological answer is to have children, which is to pass on your genes. Others say the meaning of life is simply to live your life to the fullest. Some say, however, the meaning of life is simply to give life a meaning. Others, like Solomon, argue that 'life is useless'. (Ecclesiastes 1:2)

All content from Kiddle encyclopedia articles (including the article images and facts) can be freely used under Attribution-ShareAlike license, unless stated otherwise. Cite this article:
Meaning of life Facts for Kids. Kiddle Encyclopedia.