Yea ( YAY) is a town in central Victoria, Australia 100 kilometres (62 mi) north-east of Melbourne at the junction of the Goulburn Valley Highway and the Melba Highway, in the Shire of Murrindindi local government area. In an area originally inhabited by the Taungurong people, it was first visited by Europeans of the Hume and Hovell expedition in 1824, and within 15 years most of the land in the area had been taken up by graziers. Surveyed in 1855, the township grew as a service centre for grazing, gold-mining and timber-getting in the area.

The town has had a fairly stable population (around 1,100) since 1900, though it now has a relatively old population. The town economy is based around servicing the farming sector, and tourism, with good road links but little public transport. The town has education supplied by 3 schools (state primary and high schools, and a Catholic primary). It has three churches, and active sporting clubs.

Heritage sites around the town include the railway station buildings, Purcell's General Store (run by the same family for approximately 100 years), and the nearby Yea Flora Fossil Site, where the most ancient leafy foliage so far found on earth was discovered.

The area was historically inhabited by the Taungurong people. They knew the Yea River as Caluther, and the Goulburn River as Warring. Shortly after the time of white settlement their numbers in the area were estimated at 500-600, but before this their numbers had already declined severely due to disease, and the destruction of their traditional hunting grounds by introduced stock and other European encroachment saw their numbers rapidly decrease. The first Europeans in the area were a party of explorers led by William Hovell and Hamilton Hume, who crossed the Goulburn River at a point near Molesworth in December 1824, and crossed the stream they named Muddy Creek the following day. (The Muddy Creek was renamed the Yea River in 1879.) They reported the area as very suitable for grazing, though in the hills good soil was only to be found in the hollows, but they found the forest almost impenetrable as they left the area south-west towards King Parrot Creek.

The first European settlers in the district were overlanders from New South Wales, who arrived in 1837, and by 1839 "most of the suitable country in the area had been taken up". The crossing of the Muddy Creek became quite busy as part of the route from Melbourne to the goldfields at Beechworth and the eastern highlands, and also from them to Ballarat. After a blacksmith set up a forge and dwelling at the crossing, and a complaint from the local landholder, a town was surveyed and laid out in 1855 by T.W.Pinniger. Apparently under instruction from the State Surveyor-General Andrew Clarke, it was named after Colonel Lacy Walter Yea 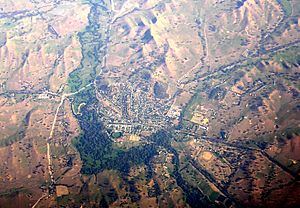 Yea expanded under the influx of hopeful prospectors, both as a natural overnight stopping place on the route from Melbourne to other goldfields, but especially when gold was discovered in the local area in the late 1850s. The gold-mining localities near Yea included the 'Providence' diggings just across the Yea River from the town, in the Ghin Ghin area, the Ti Tree Creek, and the 'Higinbotham' area on the Murrindindi Creek. None except the Providence and Ti Tree Creek yielded profitable gold on any commercial scale for more than about 5 years, the Providence was effectively closed by 1889 and the Welcome mine on Ti Tree Creek by the mid 1890s.

After the gold mining ended the town survived on servicing farming and timber getting (chiefly from the Murrindindi forests). The sawmilling industry saw a high production period from 1907 to 1915, at the end of which the Great War saw many men enlist, and then another boom from 1923 to 1930, after which the onset of the Great Depression saw production greatly reduce as demand fell. In these times of highest production, there was in excess of 2,500,000 board feet (5,900 m3) of timber sent out each year over the tramlines to Cheviot.

The Yea Dairy Company was formed in 1891. Creameries around the district substantially increased the income of local farmers, and considerable amounts of butter were shipped to Melbourne.

A major threat to the township was the Trawool Water Scheme (announced for implementation in 1908), which would have almost certainly meant the drowning of the town. Property values became depressed, and two deputations to the state minister did not appear to change his mind. Survey work commenced, but the scheme was abandoned before it was completed, in favour of the site at Eildon.

Bushfires and floods have influenced the Yea area quite frequently, fire having been recorded by the Hume and Hovell expedition, and floods affecting the roadways on a regular basis. In 1884 the area was affected by both flood and fire, on 1 January 1900 the Commonwealth Day celebrations were abandoned in order to fight a fire that surrounded the town, and in 1969 it had to be 'defended on all sides' from fire.

Yea is located on the inside (west and south) of a bend in the Yea River about 5 kilometres (3.1 mi) south-east of where it meets the Goulburn River. It is 100 kilometres (62 mi) north-east of Melbourne at 172 metres (564 ft) above sea-level, on the northern slopes of the Great Dividing Range. The centre of the town is on the flood plain of the Yea River, but the residential area to the south extends onto the slopes of the nearby hills. The Goulburn Valley Highway (B340) passes through the town, and the Melba Highway (B300) from Melbourne's eastern suburbs ends there. The other direct route to Melbourne is via the Yea-Whittlesea road (C725).

Yea's built environment consists of commercial, retail and public buildings along the Goulburn and Melba Highways as they run through the town, with residential areas largely to the south of the commercial centre, though newer residential estates have been developed to the west. The residential areas consist almost entirely of low-density, single-storey detached houses on their own blocks.

No intact examples of native vegetation survive in the area immediately around Yea. That vegetation consisted of grassy woodlands dominated by river red gum (Eucalyptus camaldulensis) on the creeklines and nearby plains, grading to grassy forest dominated by Acacia and box Eucalyptus species in the nearby valleys and hills. 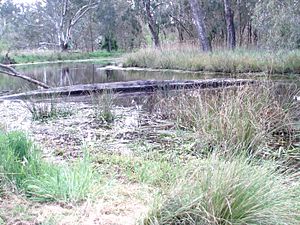 The Yea Wetlands, an area of 32 hectares (79 acres) immediately to the east of the town, and situated between two branches of the Yea River, has had extensive work done to restore its native vegetation. This site is one of only six known locations of the ancient greenling damselfly (Hemiphlebia mirabilis), although no specimens have been recorded there since 2001. 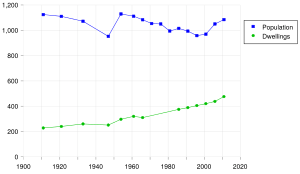 Yea, population and number of dwellings since 1900

At the 2011 census, Yea had a population of 1,086. Census records show the population of Yea has remained relatively stable since the beginning of the 20th century, except for a dip in the post second-world-war period. The number of dwellings has doubled over the same period. The higher than average proportion of older people in the town was recognised at least as early as 1991. Only half of the population over 15 years old is in the labour force.

The Yea District Road Board and its successor the Shire of Yea achieved substantial improvements in transport infrastructure in the area, including the bridges at Molesworth (1874) and King Parrot Creek (1872), and the successful lobbying for the rail line from Tallarook (opened 1883).

The railway was extended to Molesworth in 1889, chiefly for timber transport to Melbourne. The last passenger service ran on 28 May 1977, with the line closed on 18 November 1978. The complete rail line from Tallarook to Mansfield has now been converted to the Great Victorian Rail Trail.

With the withdrawal of the train service, public transport services to Yea are now limited to a V/Line coach service to Melbourne or Mansfield twice a day, and a coach service from Alexandra to Seymour via Yea once a day (on weekdays).

Although private religious worship occurred beforehand, the first public services were probably held in the 1850s. In 1857 the Muddy Creek Mission was formed, and it arranged for the services of an Anglican lay preacher, though the building they provided "should be used for the propogation of Evangelical Christianity without respect to the minor differences existing among the Protestant Evangelical Churches." A church (intended by its builder to be a Baptist church) was taken over by the Presbyterian Church in the mid 1860s, with the present Presbyterian church opened in 1923.

St Luke's Anglican church was opened in 1868, and the catholic Sacred Heart Church in 1902. 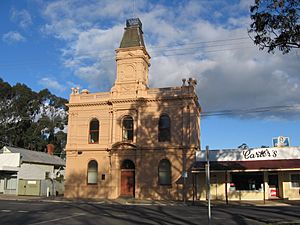 Yea has a number of buildings on the Victorian Heritage Register.

The former Yea railway station "is the most intact example of a small group of standard Gothic-styled Railway Station buildings." Built in 1889, it is now managed by a Committee of Management and used for community events, including the monthly Yea Country Market.

The former Purcells General Store "is one of the oldest buildings still intact in Yea and was owned and operated by several generations of the Purcell family until 1986." The family operated a store in the town from the 1860s until 1986.

Other buildings on the register include the former Yea & Mansfield Dairy Co Ltd building (1891) in Rattray St, the Yea Shire Hall (1877), the RSL Hall, and the Yea Memorial Hospital (1945).

The Yea Flora Fossil Site in Limestone Road is on the Australian National Heritage List due to the discovery of the most ancient leafy foliage so far found on earth.

All content from Kiddle encyclopedia articles (including the article images and facts) can be freely used under Attribution-ShareAlike license, unless stated otherwise. Cite this article:
Yea, Victoria Facts for Kids. Kiddle Encyclopedia.