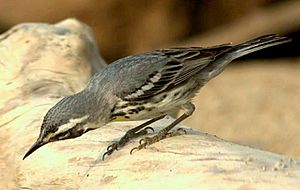 In summer, male yellow-throated warblers display grey upperparts and wings, with double white wing bars. Their throats are yellow, and the remainder of their underparts are white, and are streaked with black on the flanks. Their heads are strongly patterned in black and white, with a long supercilium; the different subspecies may display yellow and white superciliums. Remiges and rectrices are black. They measure 14 cm (5.5 in) long.

Other plumages of these birds – females immatures and non-breeding males – resemble washed-out versions of the summer males; in particular they have a less crisply defined strong head pattern. They also have less bright yellows, and dark grey feathers instead of black ones in the body plumage. Compared to many other New World warblers, sexual dimorphism is slight however.

The males' songs are clear, descending whistles. The calls are high sees or sharp chips. 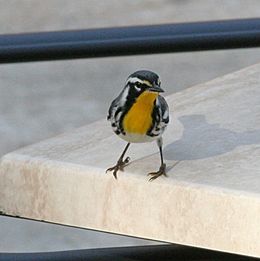 These birds breed in southeastern North America, and their breeding ranges extend from southern Pennsylvania and northern Missouri, to the Gulf of Mexico. One subspecies, from northwest Florida, is resident all year round. The other populations of this species are migratory, wintering at the Gulf Coast, eastern Central America, and the Caribbean. Vagrant wintering birds are sometimes seen in northernmost South America.

The yellow-throated warbler is a woodland species with a preference for coniferous or swamp tree species, in which it preferably nests. They are insectivorous, but will include a considerable amount of berries and nectar in their diet outside the breeding season. Food is typically picked off tree branches directly, but flying insects may be caught in a brief hover.

These birds build cup-shaped nests which are built in trees, and are concealed amongst conifer needles or Spanish Moss (Tillandsia usneoides). Their clutches consist of 3–5 (usually 4) eggs.

The yellow-throated warbler is not considered a threatened species by the IUCN.

All content from Kiddle encyclopedia articles (including the article images and facts) can be freely used under Attribution-ShareAlike license, unless stated otherwise. Cite this article:
Yellow-throated warbler Facts for Kids. Kiddle Encyclopedia.