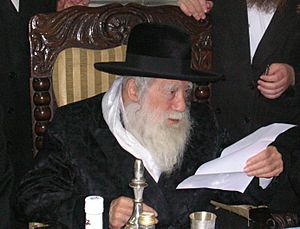 Yochanan Sofer (1923 – February 22, 2016) was a Hungarian-born Israeli religious official and activist. He was the Rebbe of the Erlau dynasty. He was born in Eger, Hungary. After surviving the Holocaust, he continued their legacy by founding a yeshiva and a movement in their name, first in Hungary and then a few years later in Jerusalem.

All content from Kiddle encyclopedia articles (including the article images and facts) can be freely used under Attribution-ShareAlike license, unless stated otherwise. Cite this article:
Yochanan Sofer Facts for Kids. Kiddle Encyclopedia.