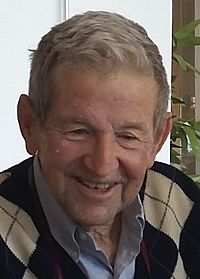 Yoram Tsafrir (30 January 1938 in Kfar Azar – 23 November 2015) was an Israeli archaeologist. His research has included the Byzantine influence on ancient synagogues, demography of Palestine in the Byzantine period. He led excavations at Beit She'an, and at Rehoboth. He was Professor Emeritus in the University of Hebrew, University of Jerusalem, and in the Institute of Archaeology. He was a member of the Israel Academy of Sciences and Humanities.

Tsafrir died in a hospital in Jerusalem, Israel from a heart attack at the age of 77.

All content from Kiddle encyclopedia articles (including the article images and facts) can be freely used under Attribution-ShareAlike license, unless stated otherwise. Cite this article:
Yoram Tsafrir Facts for Kids. Kiddle Encyclopedia.