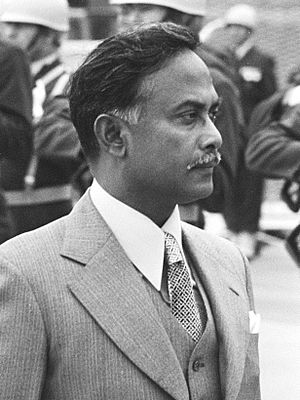 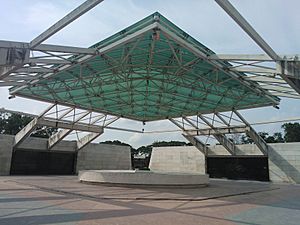 Lieutenant-General Ziaur Rahman, Bir Uttam, Hilal-i-Jurat (Bengali: জিয়াউর রহমান Ziaur Rôhman; January 19, 1936–May 30, 1981) was a Bangladeshi war hero, politician and statesman. He was the President of Bangladesh from 1976 until 1981 and founded the Bangladesh Nationalist Party (BNP), one of the two largest political parties in the country. His widow, Begum Khaleda Zia, has been Prime Minister of Bangladesh three times.

All content from Kiddle encyclopedia articles (including the article images and facts) can be freely used under Attribution-ShareAlike license, unless stated otherwise. Cite this article:
Ziaur Rahman Facts for Kids. Kiddle Encyclopedia.