Khaleda Zia (born Khaleda Khanam Putul in 1945) is a Bangladeshi politician who served as the Prime Minister of Bangladesh from 1991 to 1996, and again from 2001 to 2006. She was the first woman in the country's history and second in the Muslim majority countries to head a democratic government as prime minister. She was the First Lady of Bangladesh during the presidency of her husband Ziaur Rahman. She is the current chairperson and leader of the Bangladesh Nationalist Party (BNP) which was founded by Rahman in the late 1970s. 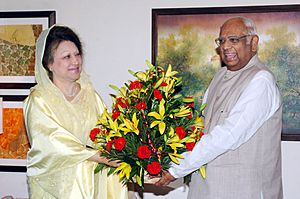 After a military coup in 1982, led by Army Chief General H M Ershad, Zia helped lead the continuing movement for democracy until the fall of military dictator Ershad in 1990. She became prime minister following the victory of the BNP in the 1991 general election. She also served briefly in the short-lived government in 1996, when other parties had boycotted the first election. 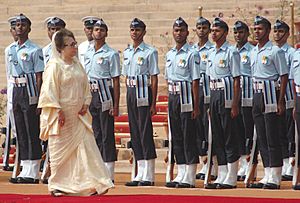 On 24 May 2011, the New Jersey State Senate honoured Zia as a "Fighter for Democracy". It was the first time the state Senate had so honoured any foreign leader and reflects the state's increasing population of immigrants and descendants from South Asia.

Following her government's term end in 2006, the scheduled January 2007 elections were delayed due to political violence and in-fighting, resulting in a bloodless military takeover of the caretaker government. During its rule, it charged Zia and her two sons with corruption.

In February 2018, Zia was jailed for five years for corruption. She was found guilty of embezzling the funds for an orphanage trust set up when she was prime minister.

All content from Kiddle encyclopedia articles (including the article images and facts) can be freely used under Attribution-ShareAlike license, unless stated otherwise. Cite this article:
Khaleda Zia Facts for Kids. Kiddle Encyclopedia.