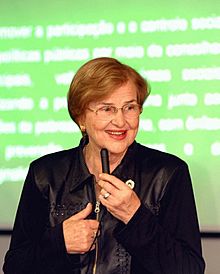 Dr. Zilda Arns (August 25, 1934 - January 13, 2010) was a Brazilian doctor and in 1983 set up the Children's Pastoral. Children's Pastoral is a Catholic church based organization which teaches mother basic health care skills. It has saved the lives of thousands of babies in Brazil.

She was born in the south of Brazil to German parents. She studied medicine at university and then set up clinics in Curitiba. She soon saw that much of the sickness, such as diarrhoea and dehydration could be prevented if parents knew how to care properly for their children. In 1983, her brother, Paulo Evaristo Arns, a bishop in the Catholic Church encouraged her to set up Children's Pastoral. It is now in 42,000 Brazilian communities, and has over 260,000 trained volunteers.

In 2007, Arns was given the Woodrow Wilson Award for Public service.

Arns was killed in the 2010 Haiti earthquake while speaking to a church group. She had gone there on a visit to a missionary organization helping with the care of babies.

All content from Kiddle encyclopedia articles (including the article images and facts) can be freely used under Attribution-ShareAlike license, unless stated otherwise. Cite this article:
Zilda Arns Facts for Kids. Kiddle Encyclopedia.