Zillmere is a suburb within the City of Brisbane, Queensland, Australia. It is located 14 kilometres (8.7 mi) north of the Brisbane central business district.

The Turrbal Aborigines occupied the region north of Brisbane River, including the area covered by Zillmere.

With European settlement, the area came to be known as Zillman's Waterholes, named after Johann Leopold Zillmann (1813–1892), a pioneering Lutheran missionary who served at the mission station nearby at Nundah. In January 1872, the Brisbane Courier described Zillman's Waterholes as being situated between Cabbage Tree Creek and Downfall Creek. It was settled with twenty-seven small farmers residing on the land. At the time there were "two chapels, a brickyard and pottery". The settlers grew pineapples, pigs and other small crops. After the North Coast Railway Line was extended to Petrie in 1888, the railway station servicing the area was named Zillmere. By the time the first housing estate was marketed in 1897, the area was also being called Zillmere. A slaughterhouse and curing works was established in 1898 by J.C. Hutton Pty Ltd to slaughter and process pigs from regional farms. 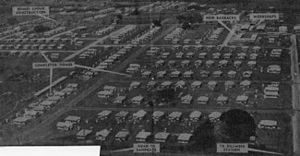 During the 1950s, the Housing Commission reclaimed farmland to construct prefabricated houses imported from France. This established Zillmere as a suburban centre. Migrant barracks near Church Road were used to resettle post-war European immigrants until they were destroyed by fire in the mid 1950s.

Today Zillmere is approximately 60% residential and 40% industrial. In recent years parts of its shopping district have been updated as part of the Brisbane City Council's urban renewal project.

Zillmere has a busy local shopping centre on the east side of the railway line adjacent to the railway station. The centre includes a Superpharm IGA, newsagent, 7/11, Domino's Pizza, pharmacy, bakery, tailor, key cutting shop and veterinary surgery.

Educational institutions located in Zillmere are:

Churches located in Zillmere are:

A council library, health facilities and public transport options are located in Zillmere.

Zillmere hosts the Zillmere Multicultural Festival (known as Zillfest). This is an annual event showcasing performing arts, crafts, delicacies and traditions of local cultural groups. There is a program of performers demonstrating traditional dances and an 'open mike' session for local talent.

All content from Kiddle encyclopedia articles (including the article images and facts) can be freely used under Attribution-ShareAlike license, unless stated otherwise. Cite this article:
Zillmere, Queensland Facts for Kids. Kiddle Encyclopedia.