Zion Lodge is located in Zion National Park, Utah, United States. The lodge was designed in 1924 as a compromise solution between its developer, the Utah Parks Company, which wanted a large hotel, and National Park Service director Stephen Mather, who desired smaller-scale development. The Utah Parks Company had been formed in 1923 as a subsidiary of the Union Pacific Railroad, and was, like many similar programs, intended to stimulate passenger rail traffic to the national parks of southwest Utah. 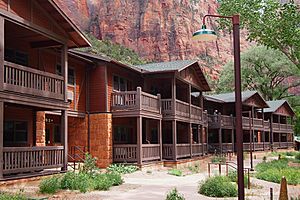 Gilbert Stanley Underwood designed the Zion Lodge as part of a series of similar structures for the Utah Parks Company at the north rim of the Grand Canyon and at Bryce Canyon National Park. Underwood's design was more modest in scale and detailing than those at the Grand Canyon and Bryce, substituting milled lumber for whole logs in a "studs-out" style. Underwood used less stonework, in smaller pieces. The structures were designed to be more in keeping with the character of the valley floor, which at the time of construction was still inhabited by settlers. Underwood would go on to design all of the Utah Parks Company buildings in the valley, many of which are included in the Zion Lodge Historic District, which surrounds the lodge.

A fire in 1966 destroyed the original lodge. It was rebuilt within 100 days, but the original rustic look was lost in favor of expedience in reopening the lodge. A 1990 remodel restored its original look.

On April 12, 1995, a landslide blocked the Virgin River downstream from the lodge. Over a period of two hours, the river had carved away 590 feet (180 m) of the only exit road from the canyon, trapping 450 guests and employees in the lodge. A one-lane temporary road was constructed within 24 hours to allow evacuation. Access to the lodge was restored on May 25, 1995.

Zion Lodge is a member of Historic Hotels of America, the official program of the National Trust for Historic Preservation.

All content from Kiddle encyclopedia articles (including the article images and facts) can be freely used under Attribution-ShareAlike license, unless stated otherwise. Cite this article:
Zion Lodge Facts for Kids. Kiddle Encyclopedia.