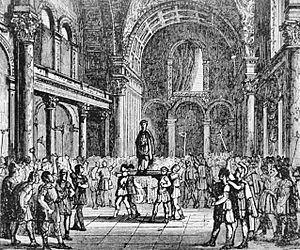 Julian is proclaimed Emperor in Paris at the Thermes de Cluny.

Year 360 (CCCLX) was a leap year starting on Saturday (link will display the full calendar) of the Julian calendar. At the time, it was known as the Year of the Consulship of Constantius and Iulianus (or, less often, year 1113 Ab urbe condita). The number 360 for this year has been used since the early Middle Ages, when the Anno Domini calendar era became the main method in Europe for naming years.

All content from Kiddle encyclopedia articles (including the article images and facts) can be freely used under Attribution-ShareAlike license, unless stated otherwise. Cite this article:
360 Facts for Kids. Kiddle Encyclopedia.