A Book of Mediterranean Food facts for kids

A Book of Mediterranean Food was an influential cookery book written by Elizabeth David in 1950, her first, and published by John Lehmann. After years of rationing and wartime austerity, the book brought light and colour back to English cooking, with simple fresh ingredients, from David's experience of Mediterranean cooking while living in France, Italy and Greece. The book was illustrated by John Minton, and the chapters were introduced with quotations from famous writers.

At the time, many ingredients were scarcely obtainable, but the book was quickly recognised as serious, and within a few years it profoundly changed English cooking and eating habits. 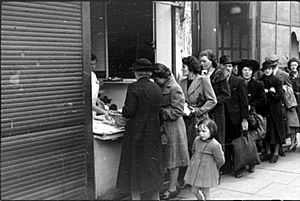 The reality of rationing and austerity: queuing for fish in London, 1945

Returning to postwar England, still with food rationing, after years living in the Mediterranean with its wealth of fresh ingredients, Elizabeth David found life grey and daunting. The food was terrible: "There was flour and water soup seasoned solely with pepper; bread and gristle rissoles; dehydrated onions and carrots; corned beef toad in the hole. I need not go on."

Partly to earn some money, and partly from an "agonized craving for the sun", David began writing articles on Mediterranean cookery. Her first efforts were published in 1949 in the British edition of Harper's Bazaar. From the outset, David refused to sell the copyright of her articles, and so she was able to collect and edit them for publication in book form. Even before all the articles had been published, she had assembled them into a typescript volume and submitted it to a series of publishers, all of whom turned it down. One of them explained that a collection of unconnected recipes needed linking text.

With this selection...of Mediterranean dishes, I hope to give some idea of the lovely cookery of those regions to people who do not already know them, and to stir the memories of those who have eaten this food on its native shores, and who would like sometimes to bring a flavour of those blessed lands of sun and sea and olive trees into their English kitchens.

David took this advice, but, conscious of her inexperience as a writer, she kept her own prose short and quoted extensively from established authors whose views on the Mediterranean might carry more weight. In the published volume, the sections are linked by substantial extracts from works by writers including Norman Douglas, Lawrence Durrell, Gertrude Stein, D. H. Lawrence, Osbert Sitwell, Compton Mackenzie, Arnold Bennett, Henry James and Théophile Gautier. She submitted the revised typescript to John Lehmann, a publisher more associated with poetry than cookery, but he accepted it, agreeing to an advance payment of £100. A Book of Mediterranean Food was published in 1950. Lehmann had suggested it be named "The Blue Train Cookery Book", since he supposed that the romance of Mediterranean countries was to be found in the exciting train journeys to reach them.

The book appeared when food rationing imposed during the Second World War remained fully in force in Britain. As David later put it, "almost every essential ingredient of good cooking was either rationed or unobtainable." She therefore adapted some of the recipes she had learned during the years when she lived in Mediterranean countries, "to make up for lack of flavour which should have been supplied by meat or stock or butter."

The historian of food Panikos Panayi argues that with A Book of Mediterranean Food, David profoundly changed English cooking. He considers the opening section to contain "perhaps the most evocative and inspirational passage in the history of British cookery writing":

The cooking of the Mediterranean shores, endowed with all the natural resources, the colour and flavour of the South, is a blend of tradition and brilliant improvisation. The Latin genius flashes from the kitchen pans. It is honest cooking too; none of the sham Grand Cuisine of the International Palace Hotel

David then describes the region and its perfumes:

From Gibraltar to the Bosphorous, down the Rhone Valley, through the great seaports of Marseilles, Barcelona, and Genoa ... stretches the influence of Mediterranean cooking, conditioned naturally by variations in climate and soil and the relative industry or indolence of the inhabitants. The ever recurring themes in the food throughout these countries are the oil, the saffron, the garlic, the pungent local wines... 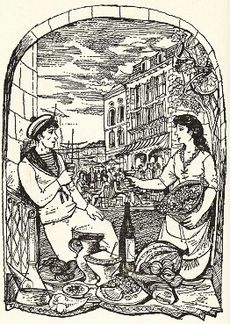 Mediterranean port scene, drawn by John Minton for the book. Elizabeth David did not like the illustrations.

Lehmann commissioned a coloured dust-jacket painting and black and white internal illustrations from his friend the artist John Minton. Writers including Cyril Ray and John Arlott commented that Minton's drawings added to the attractions of the book. David, a woman of strong opinions, thought good illustration important. Minton provided 15 decorations to give a feeling of the Mediterranean, rather than simple illustrations of dishes from David's recipes. For example, his port scene shows a sailor drinking and conversing with a young woman beside a table laden with food; in the background is a street restaurant and boats in a harbour. Although David did not like Minton's black and white drawings, she described his jacket design as "stunning". She was especially taken with "his beautiful Mediterranean bay, his tables spread with white cloths and bright fruit" and the way that "pitchers and jugs and bottles of wine could be seen far down the street."

The soup chapter sets the pattern for the book, with short, simple recipes, such as soup of haricot beans – two brief paragraphs – interspersed with long, complex ones like that for Mediterranean fish soup, which covers three pages. The eggs and luncheon dish section likewise balances the concise and simple such as ratatouille aux oeufs against the detailed and discursive three-page consideration of omelettes. Unlike many writers of cookery books, David rarely gives precise quantities or timings: in the fish chapter her suggestion for fresh tuna is:

cut it into thick slices like a salmon steak, and sauté it in oil or butter, adding, half-way through the cooking 2 or 3 tomatoes, chopped, a handful of cut parsley, and a small glass of wine, either red or white. Serve plainly cooked potatoes with it.

The meat section begins with recipes for veal, generally unfamiliar at English tables in 1950. David also gives recipes for kid and boar. Mutton, by contrast, was more often served then than in more recent decades, and David gives four recipes for it, one of them disguising the flavour to taste like venison by long marinating and highly seasoned saucing, 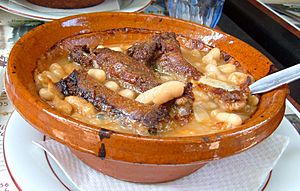 Cassoulet, a southern French dish described in the book

The "substantial dishes" chapter discusses and illustrates the merits of risotto and paella, and deals with polenta and spaghetti – both less familiar in Britain then than now – and goes on to describe cassoulet. The next chapter, on poultry and game, begins with recipes for cooking chicken and duck, and goes on to partridge – both à la provençale and in Greek style – quail and pigeons, concluding with snipe cooked en papillote with mushrooms.

The Mediterranean theme of the book is emphasised in the section on vegetables, in which there are five aubergine recipes and only one potato dish (pommes Anna). Dishes from Greece and North Africa are included along with typical southern French standards such as tomates provençales. The occasional non-Mediterranean dish is included, including cèpes à la bordelaise (fried in olive oil with parsley and garlic).

The cold food and salads chapter gives instructions for three dishes of cold chicken, several traditional pâtés and terrines, and another non-Mediterranean recipe, the traditional Easter dish from Burgundy, jambon persillé de Bourgogne. David adds to this section suggestions for hors d'oeuvres, including Greek dishes then unfamiliar in Britain including dolmádés and taramá, as well as traditional French recipes such as sardines marinées à la niçoise.

In the section on sweets, David comments that throughout the Mediterranean countries, the more complicated sweets are very often bought from pâtisseries; the few recipes she gives are for simple, traditional sweets made at home, such as torrijas (also called pain perdu) and cold orange soufflé. The jams, chutneys and preserves section includes preserved melon alongside more familiar fruits such as pears and plums.

In the final chapter, on sauces, David includes classics like béchamel, béarnaise, hollandaise and mayonnaise (which, she advises, "stir steadily but not like a maniac"). To these she adds Turkish, Greek, Italian and Egyptian sauces, the majority of them intended to go with Mediterranean fish dishes.

The book has appeared in the following editions since 1950, including translations into Danish and Chinese.

All content from Kiddle encyclopedia articles (including the article images and facts) can be freely used under Attribution-ShareAlike license, unless stated otherwise. Cite this article:
A Book of Mediterranean Food Facts for Kids. Kiddle Encyclopedia.