Acer pensylvanicum (striped maple, also known as moosewood, moose maple and goosefoot maple) is a small North American species of maple. The striped maple is a sequential hermaphrodite, meaning that it can change its sex throughout its lifetime.

The young bark is striped with green and white, and when a little older, brown.

The bloom period for Acer pensylvanicum is around late spring.

The spelling pensylvanicum is the one originally used by Linnaeus.

The natural range extends from Nova Scotia and the Gaspe Peninsula of Quebec, west to southern Ontario, Michigan, and Saskatchewan; south to northeastern Ohio, Pennsylvania, and New Jersey, and along the Appalachian Mountains as far south as northern Georgia. 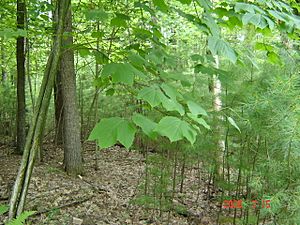 Striped maple growing at the edge of a forest with pine and hickory in the background (Zena, New York)

Moosewood is an understory tree of cool, moist forests, often preferring slopes. It is among the most shade-tolerant of deciduous trees, capable of germinating and persisting for years as a small understory shrub, then growing rapidly to its full height when a gap opens up. However, it does not grow high enough to become a canopy tree, and once the gap above it closes through succession, it responds by flowering and fruiting profusely, and to some degree spreading by vegetative reproduction.

Mammals such as moose, deer, beavers, and rabbits eat the bark, particularly during the winter.

All content from Kiddle encyclopedia articles (including the article images and facts) can be freely used under Attribution-ShareAlike license, unless stated otherwise. Cite this article:
Acer pensylvanicum Facts for Kids. Kiddle Encyclopedia.