Adams Lake is a large, deep, coldwater lake in British Columbia, Canada; its average depth ranks 6th in the world. The southern end of the lake is approximately 30 km (19 mi) north of the town of Chase in the Shuswap Country region of British Columbia. The lake's upper reaches lie in the northern Monashee Mountains, while its lower end penetrates the Shuswap Highland. The lake supports Chinook, Sockeye and Coho salmon, Kokanee, mountain whitefish and rainbow trout. 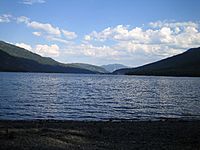 The lake is 63 km (39 mi) long and between 1.6 kilometres (0.99 mi) and 3.2 kilometres (2.0 mi) wide. The surface elevation is 404 metres (1,325 ft) above sea level. The lake is very deep; with a mean depth of 299 metres (981 ft) and maximum depth of 457 metres (1,499 ft) it is the second deepest lake in British Columbia (next to Quesnel Lake, which has a maximum depth of 511 metres (1,677 ft)) and 6th deepest lake in the world by mean depth. Water flows into the lake though many tributaries (most notably the Upper Adams River, Momich River, and Bush Creek). The water drains from the lake as the Lower Adams River which is home to a very large and famous sockeye salmon run which attracts many visitors to the region each year. From there the water flows into Shuswap Lake, and down the Thompson River.

Though a few villages exist along Adams Lake, the vast majority of the lake is undeveloped. The lack of development is partially due to the nature of the shoreline, which is mostly sheer rock faces or steep, stony beaches. Few recreationally suitable beaches exist naturally on the lake. Some man-made sandy beaches have been constructed for public use. (see "Adams Lake Provincial Park")

Chief Adam (sometimes spelled Atahm) was a prominent Secwepemc chief in the mid-nineteenth century. By most accounts, the lake is named after him. Adam died in the 1862 Pacific Northwest smallpox epidemic, which, according to James Teit, killed over half the local Secwepemc population.

Adams Lake has been the site of two Secwepemc blockades, one in solidarity with the Kanesatake Mohawk in 1990, and the other in the summer of 1995, to prevent the development of a 60-unit recreational vehicle park on Secwepemc burial ground. 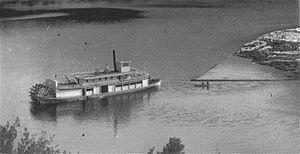 The 1995 blockade resulted in the burning of the only bridge crossing the lake, and thus the establishment of a permanent inland ferry service to access the eastern side of the lake.

The north end of Adams Lake is called Mumix in the Shuswap language.

Forestry forms the economic base for the region. Unpaved logging roads, which provide the only land access, run the full length of the lake. At the south end of the lake operates a saw mill. The logs for which are harvested further up the lake, deposited into the lake near the Momich River by a large crane. The logs are then floated down the lake to the mill in log booms drawn by tug boats. It is a common sight to see these log booms anchored in wait at lakeside.

Adams Lake is used for recreation year round. Sport anglers commonly fish the lake for Rainbow Trout, Kokanee, Lake trout, and Bull Trout. The lake is also used for swimming, pleasure boating and water skiing. The area around the lake is popular with campers and is home to a large variety of flora and fauna. During autumn and winter people hunt for game birds and big game such as mule deer, black bear, and cougar (mountain lion).

All content from Kiddle encyclopedia articles (including the article images and facts) can be freely used under Attribution-ShareAlike license, unless stated otherwise. Cite this article:
Adams Lake Facts for Kids. Kiddle Encyclopedia.