In organic chemistry an addition reaction happens when two molecules come together to make a bigger one. This can only happen when one of the molecules already has a double or triple bond. These can be carbon-carbon bonds or even carbon-oxygen, carbon-nitrogen and others. One of the two molecules is called the nucleophile, and this is the one that gives the electrons to the other to make the new bond. The other molecule is called the electrophile, and this is the one that gets the electrons. 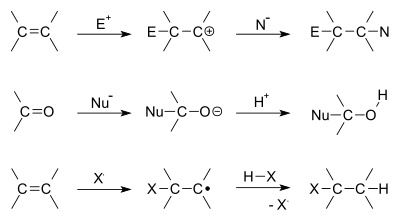 Some examples of addition reactions

All content from Kiddle encyclopedia articles (including the article images and facts) can be freely used under Attribution-ShareAlike license, unless stated otherwise. Cite this article:
Addition reaction Facts for Kids. Kiddle Encyclopedia.