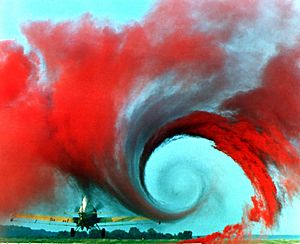 A vortex is created by the passage of an aircraft wing, revealed by smoke. Vortices are one of the many phenomena associated with the study of aerodynamics 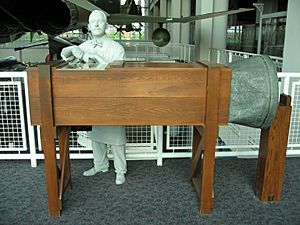 A replica of the Wright brothers' wind tunnel is on display at the Virginia Air and Space Center. Wind tunnels were key in the development and validation of the laws of aerodynamics

Aerodynamics means studying how air (or gas) travels around something moving through it.

Streamlining to reduce drag in vehicles is a major field in aerodynamics. Aircraft design is another.

The study of gases that are not in motion is called aerostatics.

In planes, lift is caused by airflow. Airplane wings are designed in such a way that, the air molecules prefer moving under the wing rather than above it, so as a result there is more air flowing underneath the wing compared to above it. This motion of the air grants upward lift to the aircraft. See Bernoulli's principle.

All content from Kiddle encyclopedia articles (including the article images and facts) can be freely used under Attribution-ShareAlike license, unless stated otherwise. Cite this article:
Aerodynamics Facts for Kids. Kiddle Encyclopedia.