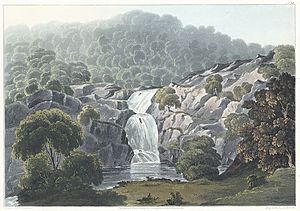 Waterfall on the Mawddach, 1816 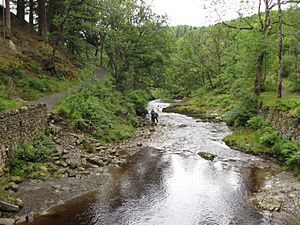 The Afon Mawddach (English: River Mawddach) is a river in Gwynedd, Wales, which has its source in a wide area SH820300 north of Dduallt in Snowdonia. It is 28 miles (45 km) in length, and is much branched; many of the significant tributaries are of a similar size to the main river. The catchment area is bounded to the east by the Aran Fawddwy massif and to the west and north by the Harlech dome which forms a watershed just south of Llyn Trawsfynydd.

The Mawddach has been the site of significant industrialisation and land management. Gold mining and subsequently gold panning have had major impacts but forestry, the preparation of animal skins, the storage of old munitions and the use of hill-sides as artillery ranges have all added to the legacy of pollution. The river is also very flashy - prone to very rapid rise and fall in level depending on rainfall. Rainfall can also be very heavy and it falls on very base-poor soils leading to episodes of strongly depressed pH. Despite this, the river sustains an important salmon and trout fishery and the countryside through which it flows is some of the most spectacular and scenic in the UK.

The main tributaries starting in the west and working clockwise are:

Below Dolgellau the river enters a wide and sandy estuary of great beauty. At its mouth is the town of Barmouth and its railway bridge.

The southern bank of the Mawddach estuary, along which used to run a section of the GWR branch line from Ruabon to Barmouth, has now been designated the Mawddach Trail, an 8-mile cycle path running from Dolgellau to Morfa Mawddach, at the south side of the Barmouth railway bridge. It is managed by the Snowdonia National Park Authority as a leisure route for walkers and cyclists, and is part of the Sustrans Cross-Wales Cycling Route.

The estuary of the Mawddach was a great centre of ship building in the 18th century and probably for some centuries before. There is no evidence remaining of this activity in the estuary today.

Panorama of the Mawddach towards Penmaenpool and Cadair Idris

All content from Kiddle encyclopedia articles (including the article images and facts) can be freely used under Attribution-ShareAlike license, unless stated otherwise. Cite this article:
Afon Mawddach Facts for Kids. Kiddle Encyclopedia.