Cadair Idris is a mountain in the historic county of Meirionnydd, Wales (or Gwynedd council area for local government purposes). It lies at the southern end of the Snowdonia National Park near the town of Dolgellau. The peak, which is one of the most popular in Wales for walkers and hikers, is composed largely of Ordovician igneous rocks, with classic glacial erosion features such as cwms, moraines, striated rocks, and roches moutonnées.

Cadair Idris means 'Idris's Chair'. Idris is usually taken to be the name of a giant or, alternatively, it may refer to Idris ap Gwyddno (or Gweiddno), a 7th-century prince of Meirionnydd who won a battle against the Irish on the mountain. Idris ap Gwyddno was in fact referred to as Idris Gawr ("Idris the Giant") in some mediaeval genealogies of Meirionydd.

The basic meaning of the word cadair (Middle Welsh/Early Modern Welsh kadeir or cadeir) is 'seat, chair' (borrowed from the Greek cathedra 'chair'). In place names cadair can mean 'stronghold, fort, fortress' or 'mountain or hill shaped like a chair'. The spelling cader represents a spoken variant of the standard form cadair.

It appears that Cadair/Cadeir Idris is the form used in the earliest Welsh-language sources. In a poem in his own hand in the second half of the 15th century, the poet Lewys Glyn Cothi wrote 'Dros gadair idris gedy' ('and then over Cadair Idris'). Around 1600, John Jones of Gellilyfdy referred to 'y mynydh neu bhan neu bhoel a elwir Cadeir Idris' ('the mountain, peak or hill known as Cadeir Idris').

The spoken form represented by cader had developed by the end of the Middle Ages and as a result the form Cader Idris was often used in English and Latin documents at that time and in more recent documents in English and Welsh.

In his Dictionarum Duplex published in 1632, John Davies of Mallwyd differentiated between the two words cadair ('chair') and cader ('fort, fortress'), referring to 'Cader Idris' and 'Cader Ddinmael'. That interpretation was followed by some later lexicographers, including Thomas Charles and Titus Lewis. It is now accepted, however, that cader is a spelling of a spoken form of cadair, and that there is no evidence that cadair and cader are separate words. But as it represents the pronunciation in the local dialect, the spelling Cader Idris is often seen in Welsh and English, and in June 2016 Snowdonia National Park decided to adopt that spelling on its signage, despite advice from the Welsh Language Commissioner and from Park officers, who favoured 'Cadair'. The local dialect form is also seen in the name of the local secondary school, Ysgol y Gader. The name of the mountain is typically spelt Cadair Idris on current maps. The summit of the mountain is known as Penygader ("top of the chair/stronghold").

The northern side of Cadair Idris viewed from Garth Gell (Bontddu)

There are three main trails that lead to the top of Cadair Idris. The summit, which is covered in scree, is marked by a trig point. There is also a low-standing stone shelter with a roof.

The Pony Path (Welsh: Llwybr Pilin Pwn), which begins in the north from either Dolgellau or the Mawddach estuary, is the easiest but the longest of the main trails. Its length from the mountain's base is 6 kilometres (3.7 mi) with a 727-metre (2,385 ft) climb.

The Fox's Path (Welsh: Llwybr Madyn),This is the most direct way to the summit as the trail leads straight up the northern face. The 3.8-kilometre (2.4 mi) ascent involves a climb up a 310-metre (1,020 ft) cliff-scree face. However, this part of the Fox's Path has been heavily eroded in recent years making the descent dangerous.

The Minffordd Path (Welsh: Llwybr Minffordd) starts on the southern side of the mountain near the glacial Tal-y-llyn Lake. Hikers using this ascent climb past Llyn Cau and along the rim of Craig Cau (rockwall) to Penygadair. Its length is 4.4 kilometres (2.7 mi) and involves two climbs of over 300 metres (980 ft). 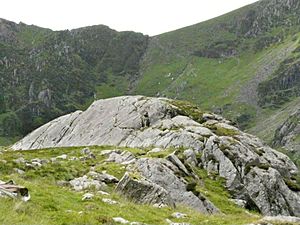 A roche moutonnée near Llyn Cau. The direction of the glacial movement was from left to right.

Cadair Idris is formed from a complexly fractured and folded pile of both sedimentary rocks and igneous rocks of Ordovician age. They comprise the mudstones and siltstones of the Ceiswyn Formation which form much of the southern part of the mountain, together with the varied rocks of the underlying Aran Volcanic Group. The steep cliffs rising above Llyn Cau to the north are formed from hard-wearing basalts and tuffs of the Pen y Gadair Volcanic Formation whilst those on the south side are acid tuffs of the Craig Cau Formation. The imposing cliffs which characterise the north side of the mountain are formed from a microgranite intruded into the Ty'r Gawen mudstones. In common with the rest of Snowdonia, the faulting and folding of this rock succession took place during the Caledonian Orogeny.

The crater-like shape of Cwm Cau has given rise to the occasional mistaken claim that Cadair Idris is an extinct volcano (though as noted above, some of its bedrock is volcanic in origin). This theory was discounted as early as 1872, when Charles Kingsley commented in his book Town Geology:

The natural bowl-shaped depression to which the name of chair has been attached, was formed by a cirque glacier during multiple ice ages when snow and ice accumulated on these slopes partly through avalanching. The glacier was up to a square kilometre in size surrounded on three sides by steep cliffs the highest being the headwall. The chair of Cadair Idris is this bowl-shaped hollow in the bedrock formed by the movement of glacial ice across the floor of the hollow, abrading it and the lip over which it then flowed.

There are several tear-drop shaped knolls above the edge of Llyn Cau, each of which is a roche moutonnée formed by the abrasive action of the moving ice. The two highest lakes are Llyn Cau and Llyn y Gader; the latter is thought to have a maximum depth of about 13 m (43 ft).

Much of the area around Cadair Idris was designated a National Nature Reserve in 1957, and is home to Arctic–alpine plants such as purple saxifrage and dwarf willow.

All content from Kiddle encyclopedia articles (including the article images and facts) can be freely used under Attribution-ShareAlike license, unless stated otherwise. Cite this article:
Cadair Idris Facts for Kids. Kiddle Encyclopedia.