The town was established in 1842 in early California Alta California. It was on the Santa Ana River, across from the era settlement of La Placita. Agua Mansa and La Placita were the first non-native settlements in the San Bernardino Valley. Together known as "San Salvador", they were also the largest settlements between Santa Fe de Nuevo México and the Pueblo de Los Ángeles in the 1840s.

The Agua Mansa Valley is located on the south side of Slover Mountain. The valley was 6 mi (9.7 km) in length; its width varied between .5 mi (0.80 km) and .75 mi (1.21 km), the variance depending on the river that flowed through the valley. The area was used as farmland, divided into at least one hundred fields, owned by separate farmers. The valley's lower end included a Frémont's cottonwoods (Populus fremontii) riparian forest owned by Rubidoux, while the upper end was a sandy plain that extended to the borders of present-day San Bernardino.

In 1845, Don Juan Bandini donated parts of his land grant Rancho Jurupa to a group of Mexican colonists from Abiquiú in Santa Fe de Nuevo México — on the condition that they would assist in protecting his stock from local Indian raids. Ten of these families moved to 2,000 acres (810 ha) on the "Bandini Donation" on the east side of the Santa Ana River, forming the village of La Placita, while a second group colonized the west side of the river, forming the town of Agua Mansa. The group that formed Agua Mansa was led by Don Jose Tomas Salajar, and included Cristobal Slover and Louis Rubidoux.

After the adobe church built in La Placita in 1852 collapsed in quicksand, a new church was built in Agua Mansa. Completed in 1853 and dedicated to San Salvador, the church survived through the Great Flood of 1862. The parish, which included Agua Mansa and La Placita, became known as San Salvador de Jurupa, and was the first non-mission parish in Southern California. The chapel's bell now hangs at the Glenwood Mission Inn.

The town prospered for almost 20 years until the 1862 flooding swept away many of the adobe buildings, leaving the area strewn with sand and gravel. Though the town was rebuilt on higher ground, its prosperity did not return.

Built in 1870 in Agua Mansa, the Jensen Alvarado Ranch is a California Historical Landmark and is listed on the National Register of Historical Places. Its vineyard produced and sold thousands of gallons of wine each year. 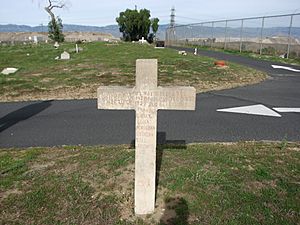 A grave marker at the Agua Mansa cemetery.

Agua Mansa is designated California Historical Landmark (No. 121). The marker is located at Agua Mansa Pioneer Cemetery, the only site that remains of the once flourishing town. The first burial occurred in 1852, and the last occurred 111 years later in 1963. In 1955, a descendant of the original Agua Mansa families established "Friends for the Preservation of the Agua Mansa Pioneer Cemetery" and the volunteers of this group refurbished the cemetery, fenced it off and added a gate. In 1967, the cemetery became a branch of the San Bernardino County Museum after its acquisition by San Bernardino County. It has a museum and chapel, and tours are available.

Records of who is buried in the cemetery are incomplete but about 750 names have been identified out of a total of 2,000 estimated burials. Only a few grave markers remain today. The earliest known interment was that of Louis Robidoux, who came to California in 1844 and bought the Jurupa Rancho near today's City of Riverside. Another burial was that of Cornelius Jensen in 1886; Jensen was a Danish sea captain who established a store at Agua Mansa before moving to part of the Robidoux ranch. Jensen's wife, Mercedes Alvarado, is also buried in the cemetery along with other members of her family. Lorenzo Trujillo, the original patriarch of the community, is also believed to rest somewhere in a grave that long ago lost its marker. Isaac Slover, a mountain man and bear hunter who came to California in his old age (and who was killed in 1854 by a bear), is also thought to be buried in the cemetery. Many of the current grave markers are replacements and may not be located in the proper site.

All content from Kiddle encyclopedia articles (including the article images and facts) can be freely used under Attribution-ShareAlike license, unless stated otherwise. Cite this article:
Agua Mansa, California Facts for Kids. Kiddle Encyclopedia.