The owners are Duane and Kelly Roberts. The latter serves as vice chairman and chief operating officer.

The property began as a quaint adobe boarding house called The Glenwood Cottage, built by engineer/surveyor Christopher Columbus Miller and on November 22, 1876, the Millers took their first paying guest. In February 1880, Miller's son Frank Augustus Miller purchased the hotel and land from his father. It became into a full-service hotel in the early 1900s due to California's economic citrus boom and warm weather, attracting wealthy travelers and investors from East Coast and Europe. In 1902, Frank changed the name to the "Glenwood Mission Inn" and started building, in a variety of styles, until he died in 1935. 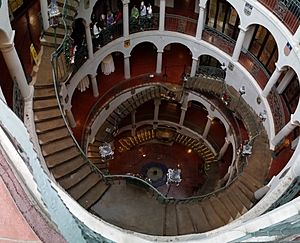 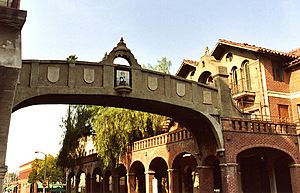 During the 30-year construction period, Miller traveled the world, collecting treasures to bring back to the hotel for display.

The St. Francis Chapel houses four large, stained-glass windows and two original mosaics by Louis Comfort Tiffany in 1906. The windows were salvaged from the Madison Square Presbyterian Church and the chapel purpose built to house them. The Mexican-Baroque styled "Rayas Altar" is 25 feet tall by 16 feet across, carved from cedar and completely covered in gold leaf. For his "Garden of Bells," Miller collected over 800 bells, including one dating from the year 1247 described as the "oldest bell in Christendom."

In 1932, Frank Miller opened the St. Francis Atrio. The "Famous Fliers' Wall", added by Miller's son-in-law DeWitt Hutchings, was used to recognize notable aviators, including Amelia Earhart. On March 20, 1942, World War I ace Eddie Rickenbacker was honored at the inn, becoming the fifty-seventh flier added to the monument. Today, 151 fliers or groups of fliers are honored by having their signatures etched onto 10-inch-wide (250 mm) copper wings attached to the wall.

Frank Miller died in 1935 and the inn continued under the management of his daughter and son-in-law, Allis and DeWitt Hutchings, who died in 1956. The inn then went through a series of ownership changes and some of its older rooms were converted to apartments and used as dorms for UC Riverside. In the early 1960s, St. John's College considered buying it as a location for its western campus but abandoned negotiations when John Gaw Meem donated land in Santa Fe, New Mexico. 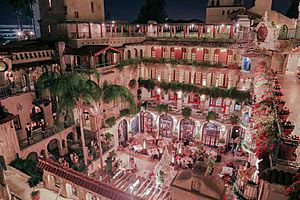 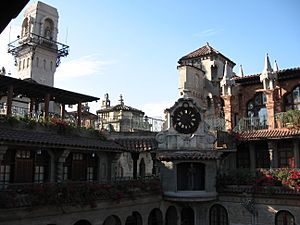 For 140 years, the Mission Inn has been the center of Riverside, host to U.S. Presidents, celebrities, a number of seasonal and holiday functions, as well as occasional political functions and other major social gatherings. Pat and Richard Nixon were married in what is now the Presidential Lounge, Nancy and Ronald Reagan honeymooned there, and eight other U.S. presidents have visited the inn: Benjamin Harrison, William McKinley, Theodore Roosevelt, William Howard Taft, Herbert Hoover, John Fitzgerald Kennedy, Gerald Ford, and George W. Bush.

The list of entertainers who have toured the inn is extensive. Lillian Russell, Sarah Bernhardt and Harry Houdini were early visitors to Frank Miller's hotel. Other guests have included actors such as Ethel Barrymore, Charles Boyer, Eddie Cantor, Mary Pickford, Ginger Rogers, Bette Davis (who was married at the inn in 1945), W.C. Fields, Clark Gable, Cary Grant, Spencer Tracy, Fess Parker, James Brolin and Barbra Streisand, Raquel Welch and Drew Barrymore. Other celebrities such as Jack Benny, Bob Hope, Glen Campbell, Merle Haggard and Tears for Fears have stopped by.

The inn continues to be a getaway for notable individuals to this day. Arnold Schwarzenegger has stayed there during his tenure as governor of California and the Osbournes have paid a visit in the past few years. 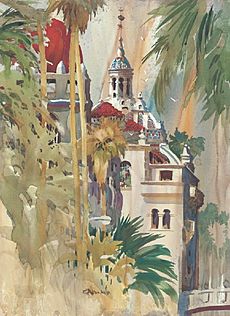 The hotel, which occupies an entire city block, has 4 restaurants, a day spa and 239 guest rooms (nine rooms designated as presidential suites). It is a National Historic Landmark, a California Historical Landmark, and Riverside City Landmark #1. The hotel's aesthetic charm makes it a frequent subject for local artists.

The Mission Inn Museum promotes the cultural heritage of the Mission Inn. It is operated by the Mission Inn Foundation, an independent nonprofit organization (Tax ID 51-0205032). A permanent exhibition features the history of the inn as well as inland Southern California history. The main gallery hosts changing exhibitions which rotate 2-3 times per year. The museum offers educational programs and daily guided tours. Specialty tours on the Women of the Mission Inn, the hotel's fine art collection, photography tours, and architecture tours are offered on a quarterly basis. The Hands On History Outreach Program is an award-winning educational workshop series that provides opportunities for middle school students to connect with their local heritage through oral history interviews, photography, technology, and public speaking. Youth Ambassadors is a high school docent program which encourages civic engagement, leadership, and confidence in youth ages 15–18. The daily guided tours are the museum's most popular attraction, hosting over 20,000 guests per year.