Aguiguan (also Aguigan and Aguihan, based on the Spanish rendition of the native name, Aguijan, which is still used) is a small bean-shaped coralline island in the Northern Mariana Islands chain in the Pacific Ocean. It is situated 8 kilometers (5.0 mi) south-west of Tinian, from which it is separated by the Tinian Channel. Aguiguan and neighboring Tinian Island together form Tinian Municipality, one of the four main political divisions that comprise the Northern Marianas. 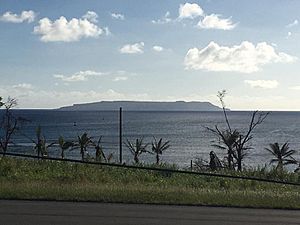 Aguigan, viewed from the southern end of Tinian

It is likely that first sighting by Europeans occurred during the Spanish expedition of Ferdinand Magellan, or by its continuation by Gonzalo Gómez de Espinosa being charted as Santo Ángel. It was visited by the Spanish missionary Diego Luis de San Vitores in 1669.

Aguiguan was administered as part of the Spanish Mariana Islands from the 16th century to 1899, when the Northern Marianas were sold by Spain to the German Empire. Under Germany, it administered as part of German New Guinea. During World War I, Aguiguan came under the control of the Empire of Japan and was administered as part of the South Seas Mandate. During World War II, the Imperial Japanese Army maintained a garrison on Aguigan. This garrison is noteworthy because of its surrender to Allied forces September 4, 1945, two days after the surrender of Japan on the USS Missouri (BB-63). The surrender is unique because it was the only surrender hosted by a U.S. Coast Guard Cutter, USCG 83525. US Navy Admiral Marshall R. Greer received the surrender of the Japanese Second Lieutenant Kinichi Yamada.

Following World War II, Aguiguan came under the control of the United States and was administered as part of the Trust Territory of the Pacific Islands. Since 1978, the island has been part of the Commonwealth of the Northern Mariana Islands. 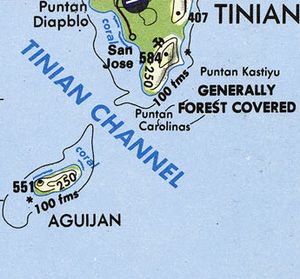 Aguiguan is separated from Tinian by Tinian Channel (1988 map)

Aguiguan is uninhabited and is seldom visited because it is surrounded by sheer steep cliffs. However, a 2002 survey of the island did find a handful of native species there, including the Mariana fruit bat, the Polynesian sheath-tailed bat and the Micronesian megapode Megapodius laperouse. 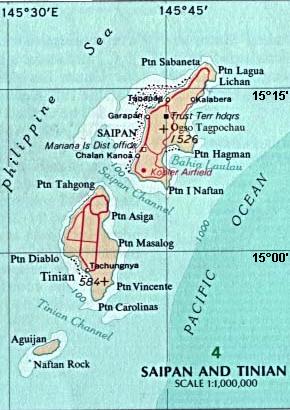 Approximately 1 kilometer (0.62 mi) off the south-west shore of Aguiguan is Naftan Rock, 18 meters (59 ft) in elevation.

All content from Kiddle encyclopedia articles (including the article images and facts) can be freely used under Attribution-ShareAlike license, unless stated otherwise. Cite this article:
Aguiguan Facts for Kids. Kiddle Encyclopedia.