The rufous fantail (Rhipidura rufifrons) is a small Passerine bird, most commonly known also as the black-breasted rufous-fantail or rufous-fronted fantail, which can be found in Australia, Indonesia, Micronesia, New Guinea and the Solomon Islands. In these countries they inhabit rainforests, wet forests, swamp woodlands and mangroves.

Characteristic of species that have a large range, the rufous fantail has many subspecies. However the taxonomic treatment of its subspecies and other relatives is still debated. The rufous fantail is easily distinguished by their orange-reddish-brown back, rump and base of tail. They have a black and white breast that grades into a white colour on the chin and throat.

They are migratory, travelling to south-eastern Australia in the spring to breed, and then north in the autumn.

The rufous fantail tends to feed on small insects in the lower parts of the canopy. They are very active birds making short, frequent flights. They may also hop between foliage or on the ground, during foraging.

Although their population is thought to be declining, their relatively large range and abundance make them a species of least concern according to the IUCN.

The rufous fantail has complex evolutionary relationships and sometimes this results in conflicting taxonomy. This is not uncommon since taxonomies are merely hypotheses of a species' evolutionary status. Debate is still currently ongoing about the taxonomic treatment of the rufous fantail's subspecies and its related species.

It is one of over 40 member species of the genus Rhipidura, commonly known as the fantails. Within the genus it belongs to a group of five closely related species: R. rufidorsa, R. brachyrhyncha, R. dahli, R. teysmanni and R. dryas. A molecular phylogeny study showed the Arafura fantail (Rhipidura dryas) to be its closest relative.

The current spatial distribution suggests an ancestry originating in the Papuan region, most likely New Guinea. The ancestral form may have had a white chin, white throat, and a light grey breast as well as a greyish-brown head and back. Indirect evidence suggests that ancestral species undertook two periods of aggressive range expansions (dispersal) separated by a period of inactivity.
During the former dispersal period, it is hypothesised by Mayr et al. (1946)
that:

During the latter dispersal period, the true rufifrons group underwent "explosive sub-speciation". This is in stark contrast to the other members whose evolution was stagnant. The true rufifrons further evolved into eighteen subgroups.

The rufous fantail is a superspecies comprising eighteen recognised subspecies. In alphabetical order, these are: 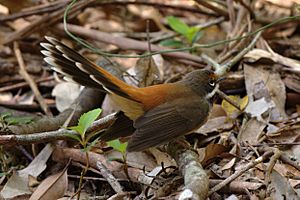 Adults are medium-sized birds, generally ranging from 14.5 cm – 18.5 cm in length, averaging at around 15 cm; their wingspan is between 18 cm – 22.5 cm, averaging at around 21 cm. They weigh roughly 10 grams. The male and female of the species look identical. However, females are generally smaller than the males.

The forehead is a richly reddish-brown colour across the eyes. The eyes have a white arc just below them. The top of the head, back of the neck and the upper back, transition from an olive to reddish-brown colour, which then blends into a blackish-brown, long, fan-shaped tail. This blackish-brown tail, contrasts with the base of the tail, which is tipped with a paler colour, often white.

It has black ear-coverts (feathers over the ears, just below and behind the eyes). The throat is white (in most subspecies), and there is a black bar across the upper breast. Below this, the lower breast is off-white with black scale-like spots which transitions into an off-white colour towards the centre of the abdomen. The eyes, bill and feet of the bird are all a brown colour.

The aforementioned colours do not change during different seasons. However, compared to the adults, the juveniles have generally duller coloured backs and marginally browner tails and underparts. On the other hand, the base of the bill and their legs are a paler brown relative to an adult's.

A physical description that may help distinguishing between the different subspecies can be found in the subspecies section of this article.

The plumage in the immature birds is similar to those of the adults and in both sexes. Adults moult annually prior to the breeding season, and this basic plumage does not vary.

These have been not been well characterised in the rufous fantail. Nevertheless, it has been observed to create several different types of sounds such as chips, buzzes, and scolds. Their "chip call" is often what first attracts an observer's attention. This call is high pitched, with two chip noises given in quick succession. It is produced during food searching, territory defence and can be used as an alarm call when a predator is identified. They sing after sunset from perches, one reason is to attract the opposite sex.

Whilst it is similar in size and shape to grey fantails (Rhipidura albiscapa), it has a slightly larger fantail and creates higher pitched and softer songs.

Its diagnostic physical features: orange-reddish-brown back, rump and base of tail – easily differentiate it from other fantails. Moreover, it can be further distinguished from similar fantails as it tends to forage in shady and moist regions of habitats that are close to the ground.

The rufous fantail can be found in parts of Australia, southeast Asia, and in the Oceanic regions of Micronesia and Melanesia. They are residents of the Lesser Sunda Islands and the Maluku Islands of Indonesia, southern New Guinea and its associated islands, the Solomon Islands, the Marianas and the Carolinian island of Yap. In Australia, they are found in the northern and eastern coastal regions.

Certain subspecies tend to be restricted to some ranges. See the subspecies section of this article for more detailed information.

The rufous fantail inhabits moist and moderately dense habitats. Within these areas, it has astonishingly large variations in habitat requirements. They can be found in eucalyptus forests, mangroves, rainforests and woodlands (usually near a river or swamp). Rarely, they have even been found in dry sclerophyll forests. Apart from open grasslands and open arid areas, there are not many major types of landscape in the Australo-Pauan region that cannot be inhabited by at least one subspecies of the rufous fantail.

Rufous fantails will generally occupy the lower levels of their habitat, the understorey or the subcanopy, straying no further than 6m from the ground. Different subspecies may tend to prefer slightly different habitats which can be sometimes discrete or overlapping.

Studies on rufous fantail social behaviour are sparse. Some observers have anecdotally described them as curious and trustful, whilst others depict them as shy creatures. However, there is consensus in that they are almost always portrayed as hyperactive, constantly on the move, fidgeting and waving a fanned-out tail.

They are usually observed flitting about in the lower layers of their habitat, in close association with the shade, making short, frequent flights separated by brief moments of perching and sometimes hopping between foliage or onto the ground. 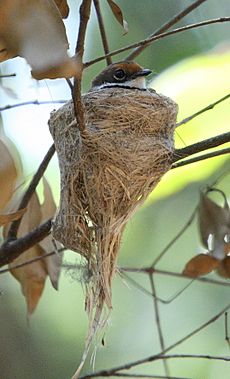 When they are spotted, they are usually either on their own or in pairs. Although their social bonding is not well known, they nest in pairs and are thought to be monogamous. Males will produce vocal songs to both defend and advertise their territory. Sometimes this can result in intense, rapid and prolonged vocal "battles".

After pairing, both will search for a suitable breeding site. The female has the final say on nest location. Some males have been known to feed their paired females for up to 2–3 weeks before and during the selection of the nest site and building of the nest. Their breeding sites are mainly in rainforest regions or sheltered, humid gulies with an abundance of dense cover such as trees, saplings, shrubs and vines. The nest, will usually be built at the fork between two nearly horizontal tree branches in proximity to a water source, such as a stream. The structure of the nest is often compared to a wine glass with a broken bottom stand. The nest is built, usually in November, December and January, using thin strips of tree bark, grass, moss rootlets and decayed wood.

The eggs themselves are round or oval in shape and occasionally have a point at one end. Their colour is generally described as somewhere between a pale cream to yellowish white. These have light brown and purplish markings or spots. There are normally 3 or 4 eggs produced in a nest.

Both the males and the females give (frequently alternating) parental care, which includes: feeding their nestlings and removing their feacal sacs from the nest. Whilst only females have actually been observed to incubate (brood) laid eggs, it is assumed males can do this as well.

Four to five weeks after hatching, the young will leave the nest. However, they will remain near their nest (natal area) until they undertake their first migration.

Some subspecies have slightly differing migration patterns. However, the vast majority exhibit strong migratory behavior – they use the same route year after year and have regular departure and arrival times. They migrate to south-eastern Australia in the spring to breed, beginning in September, peaking in October, and then north in the autumn during March and April. This has been well characterised. 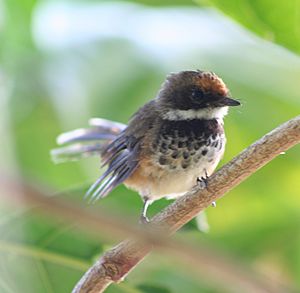 They eat mostly small insects and will often join mixed species feeding flocks to do so. These usually comprise other small Passerine birds such as: the spectacled monarch, the little shrikethrush, the large-billed scrubwren and less occasionally, the green-backed honeyeater.

The rufous fantail is mostly an aerial forager, rarely perching during feeding. Prey are found during almost continuous movement in and between vegetation. They stop (perch) for very short periods of time, during which they fan their tails. Much more rarely, they perch for longer than five seconds to survey surroundings.

Once a prey is located, they will pursue it by exhibiting extremely agile and maneuverabile flight within the canopy ( by salling, flush-pursuit or flutter-chase).

However, they are versatile foragers, also capable of different foraging methods, occasionally hovering to glean prey from leaves and (very rarely) from the ground and other fallen debris. They have longer legs relative to other Rhipidura species, enabling them to have agile movement on the ground as well.

Many eggs and young are lost to the suspected predator, the pied currawong (Strepera graculina). 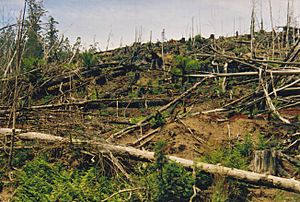 Aftermath of logging in Tasmania, Australia

The logging of forests has been shown to influence foraging preference, changing from the forest floor to the lower canopy. However, they prefer undisturbed forests. Logging decreases breeding habitat and increases the risk of fragmentation, particularly if these forests are in migration routes.

The range of the rufous fantail is very extensive. On this basis it does not have a range small enough to be considered vulnerable (<20,000 km2). Although the population size has not been properly characterised, it is thought to be declining, but not rapidly enough to be placed into vulnerable status. Therefore, the species is of least concern as classified by the IUCN.

All content from Kiddle encyclopedia articles (including the article images and facts) can be freely used under Attribution-ShareAlike license, unless stated otherwise. Cite this article:
Rufous fantail Facts for Kids. Kiddle Encyclopedia.